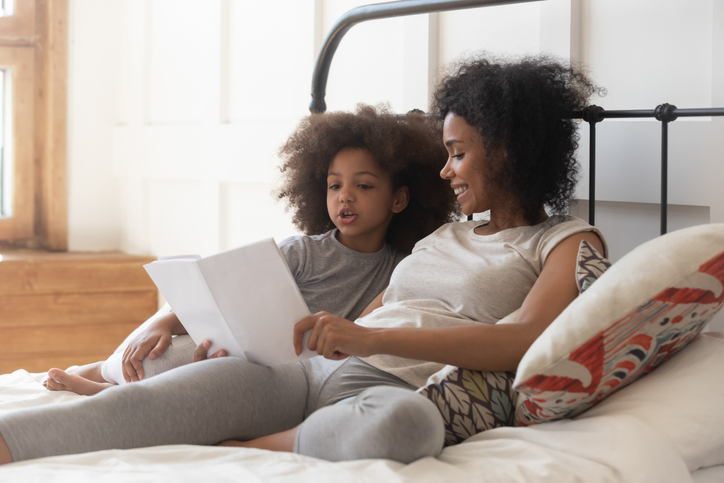 The Coretta Scott King Book Awards are given annually to outstanding African American authors and illustrators of books for children and young adults that demonstrate an appreciation of African American culture and universal human values. The award commemorates the life and work of Dr. Martin Luther King, Jr., and honors his wife, Mrs. Coretta Scott King, for her courage and determination to continue the work for peace and world brotherhood. Here are the 2020 winners.

Caldecott Medal Winner and King Illustrator Book of the Year 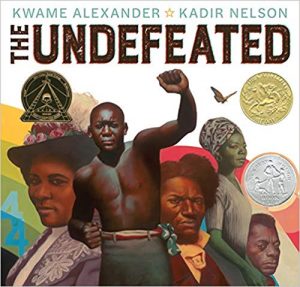 For 2020, one book stands out: The Undefeated written by Kwame Alexander and illustrated by Kadir Nelson. It is the winner of the Randolph Caldecott Medal for the most distinguished American picture book for children. It’s also a Newberry Honor Book and the King Illustrator Book of the year. This luminous poem is a love letter to America. To Black America. To the grit, passion, and perseverance of our greatest artists, athletes and activists. To the dreamers. To the strength and bravery of everyday people caught in the web of history.

This is for the unforgettable.

The swift and sweet ones

and opened a world

The ones who survived

by any means necessary.

The Undefeated highlights the unspeakable trauma of slavery, the faith and fire of the civil rights movement, and the grit, passion, and perseverance of some of the world’s greatest heroes. The text is also peppered with references to the words of Martin Luther King, Jr., Langston Hughes, Gwendolyn Brooks, and others, offering deeper insights into the accomplishments of the past, while bringing stark attention to the endurance and spirit of those surviving and thriving in the present. Robust back matter at the end provides valuable historical context and additional detail for those wishing to learn more.

Newberry Medal Winner and King Author Book of the Year 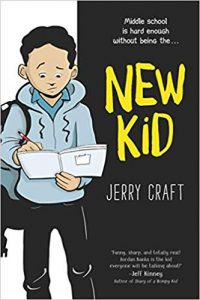 New Kid is the Newberry Medal winner and the King Author Book winner for 2020. This is a timely graphic novel about starting over at a new school where diversity is low.

Seventh grader Jordan Banks loves nothing more than drawing cartoons about his life. But instead of sending him to the art school of his dreams, his parents enroll him in a prestigious private school known for its academics, where Jordan is one of the few kids of color in his entire grade.

As he makes the daily trip from his Washington Heights apartment to the upscale Riverdale Academy Day School, Jordan soon finds himself torn between two worlds—and not really fitting into either one. Can Jordan learn to navigate his new school culture? 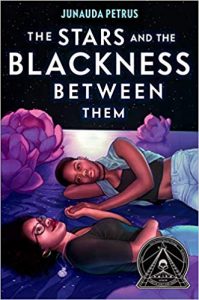 The Stars and the Blackness Between Them
Written by Junauda Petrus
2019
320 pages
Ages: Teen and Young Adult
Dutton Books

Junauda Petrus’s bold and lyrical debut is the story of two black girls from very different backgrounds finding love and happiness in a world that seems determined to deny them both. The story is told in two distinct and irresistible voices.

Sixteen-year-old Audre is being sent from Trinidad to live with her strict father in America because her strictly religious mother caught her wither secret girlfriend, the pastor’s daughter. Sixteen-year-old Mabel is lying on her bed, staring at the ceiling and trying to figure out why she feels the way she feels–about her ex Terrell, about her girl Jada and that moment they had in the woods, and about the vague feeling of illness that’s plagued her all summer. Mabel’s reverie is cut short when her father announces that his best friend and his just-arrived-from-Trinidad daughter are coming for dinner.

Mabel quickly falls hard for Audre and is determined to take care of her as she tries to navigate an American high school. But their romance takes a turn when test results reveal exactly why Mabel has been feeling low-key sick all summer and suddenly it’s Audre who is caring for Mabel as she faces a deeply uncertain future. 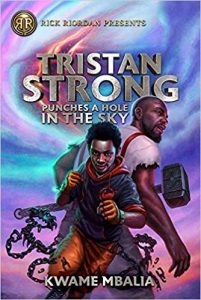 Tristan Strong Punches a Hole in the Sky
Written by Kwame Mbalia
2019
496 pages
Ages: 8 to 12
Disney-Hyperion

Kwame Mbalia’s epic fantasy is set in a richly-imagined world populated with African American folk heroes and West African gods. Seventh grader Tristan Strong feels anything but strong ever since he failed to save his best friend when they were in a bus accident together. All he has left of Eddie is the journal his friend wrote stories in.
Tristan is dreading the month he’s going to spend on his grandparents’ farm in Alabama, where he’s being sent to heal from the tragedy. But on his first night there, a sticky creature shows up in his bedroom and steals Eddie’s notebook. Tristan chases after it–is that a doll?–and a tug-of-war ensues between them underneath a Bottle Tree. In a last attempt to wrestle the journal out of the creature’s hands, Tristan punches the tree, accidentally ripping open a chasm into the MidPass, a volatile place with a burning sea, haunted bone ships, and iron monsters that are hunting the inhabitants of this world.
Tristan finds himself in the middle of a battle that has left black American folk heroes John Henry and Brer Rabbit exhausted. In order to get back home, Tristan and these new allies will need to entice the god Anansi, the Weaver, to come out of hiding and seal the hole in the sky. But bartering with the trickster Anansi always comes at a price. Can Tristan save this world before he loses more of the things he loves. 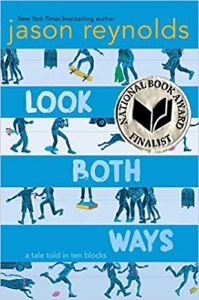 Look Both Ways: A Tale Told in Ten Blocks
Written by Jason Reynolds
Illustrated by Alexander Nabaum
2019
208 pages
Ages: 10 to 14
Antheneum Books for Young Readers
This story was going to begin like all the best stories. With a school bus falling from the sky. But no one saw it happen. They were all too busy—

Jason Reynolds conjures ten tales (one per block) about what happens after the dismissal bell rings, and brilliantly weaves them into one wickedly funny, piercingly poignant look at the detours we face on the walk home, and in life. 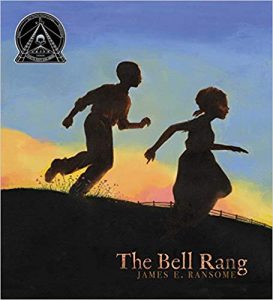 A young slave girl witnesses the heartbreak and hopefulness of her family and their plantation community when her brother escapes for freedom in this brilliantly conceived picture book by James E. Ransome.

Every single morning, the overseer of the plantation rings the bell. Daddy gathers wood. Mama cooks. Ben and the other slaves go out to work. Each day is the same. Full of grueling work and sweltering heat. Every day, except one, when the bell rings and Ben is nowhere to be found. Because Ben ran. Yet, despite their fear and sadness, his family remains hopeful that maybe, just maybe, he made it North. That he is free.

An ode to hope and a powerful tribute to the courage of those who ran for freedom, The Bell Rang is a stunning reminder that our past can never be forgotten. 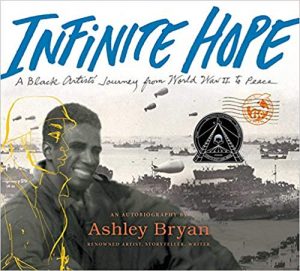 Infinite Hope: A Black Artist’s Journey from World War II to Peace
Written and Illustrated by Ashley Bryan
2019
112 pages
10 and up
Atheneum Books for Young Readers

A deeply moving picture book memoir about serving in the segregated army during World War II, and how love and the pursuit of art sustained him. In May of 1942, at the age of eighteen, Ashley Bryan was drafted to fight in World War II. For the next three years, he would face the horrors of war as a black soldier in a segregated army.

He endured the terrible lies white officers told about the black soldiers to isolate them from anyone who showed kindness—including each other. He received worse treatment than even Nazi POWs. He was assigned the grimmest, most horrific tasks, like burying fallen soldiers…but was told to remove the black soldiers first because the media didn’t want them in their newsreels. And he waited and wanted so desperately to go home, watching every white soldier get safe passage back to the United States before black soldiers were even a thought.

For the next forty years, Ashley would keep his time in the war a secret. But now, he tells his story. The story of the kind people who supported him.
The story of the bright moments that guided him through the dark.
And the story of his passion for art that would save him time and time again. Filled with never-before-seen artwork and handwritten letters and diary entries, this illuminating and moving memoir is both a lesson in history and a testament to hope. 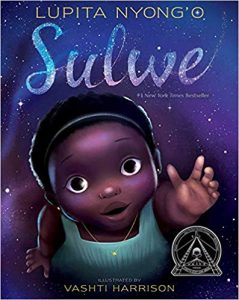 From Academy Award–winning actress Lupita Nyong’o comes a powerful, moving picture book about colorism, self-esteem, and learning that true beauty comes from within.

In this stunning debut picture book, actress Lupita Nyong’o creates a whimsical and heartwarming story to inspire children to see their own unique beauty.