In 2006, Mothering magazine held a contest to find a design for an International Breastfeeding Symbol. We held the contest because we were dismayed by the ubiquity with which the bottle is used as a cultural symbol for baby, feeding, and parenthood. For example, a baby bottle is currently used as the Newborn icon in the New York Times parenting section.

Images of baby bottles abound in our culture. We see them on shower gifts, wrapping paper, gift bags, decorated streamers, balloons, cards and clothing. Children’s books are full of images of baby bottles. Baby dolls usually come with tiny baby bottles. And, baby bottle images are often used in public places like airports and convention centers to designate child and/or family friendly facilities or services. In response, the International Breastfeeding Symbol was created to: 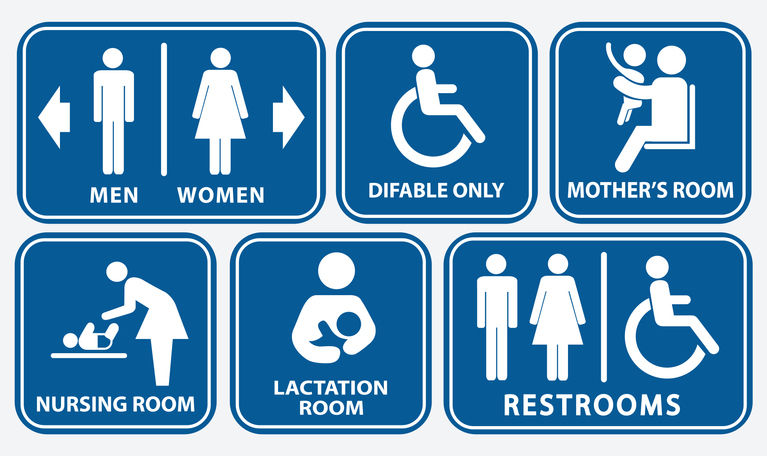 The International Breastfeeding Symbol was meant to be compatible with the Symbol Signs created by US Department of Transportation and the American Institute of Graphic Artists (AIGA) and it may one day be adopted by AIGA. The final design was selected based on the following criteria:

The winning symbol was selected from more than 500 entries and was designed by Matt Daigle, a stay-at-home dad, freelance graphic designer, and cartoonist. He and his wife, Kay, are the parents of Hayden.  Matt has signed over his design to the Public Domain so that anyone can use the symbol, copyright free.

How the symbol is used

When it was first created in 2006, it was recommended that the International Breastfeeding Symbol be used:

Since then, however, the reach of the symbol has far exceeded our expectations. It is now used to designate breastfeeding friendly and family friendly rooms in airports all over the world. In fact, as a result of the activism that the symbol inspired, breastfeeding rooms are now required in all major US airports. The symbol was first used for activism in 2006 when 800 nursing mothers protested at more than 40 US Delta airline counters nationwide and it has been used at numerous nurse-ins since; it is now commonplace in lactation clinics, healthcare facilities and at breastfeeding events.

The symbol in public

While many public places easily accommodate breastfeeding, in places like airports, it can be hard to find a quiet place to sit and nurse your baby and next to impossible to find a private place to pump if you are separated from your baby. Breastfeeding rooms are not meant to segregate breastfeeding, but to help integrate it into society by better accommodating it in public. For example, sometimes there are no chairs in public, sometimes nowhere to change the baby, or nowhere to plug in an electric breast pump. Mothers welcome quiet, private places in public where they can collect themselves and their children. The symbol designates these kinds of places. At the least, they should be private rooms with a comfortable chair and a changing table as well as an electric plug.

The symbol and political action

In addition to its other uses, the International Breastfeeding Symbol can be used for political action such as:

Here is a copy of the symbol?

Why is breastfeeding important?

The risks of not breastfeeding are significant. Worldwide, breastfeeding is a strategy for improving public health because under-five mortality is dramatically reduced as the incidence of exclusive breastfeeding rises. Improving breastfeeding rates around the world could save more than 820,000 children under the age of 5 every year, with the majority of those under six months of age, and could prevent around 20,000 maternal deaths a year.

Despite this overwhelming encouragement to breastfeed from health care professionals, women’s breastfeeding success is undermined by inadequate support, workplace obstacles, and misinformation from the formula food industry. In 2007, for example, 72.6% of US hospitals offered free formula gift bags to all new mothers. A CDC epidemiological review of studies on these gift bags found that 7 out of 11 who received them, showed lower exclusive breastfeeding rates. This trend was reversed by 2015, however, when 78.7% of US hospitals reported banning free formula samples.

The International Breastfeeding Symbol is a symbol of advocacy in a culture that is still learning how to support breastfeeding.

About Peggy O’Mara. I am an independent journalist who edits and publishes peggyomara.com. I was the editor and publisher of Mothering magazine for over 30 years. My books include Having a Baby Naturally, Natural Family Living, The Way Back Home and A Quiet Place. I have conducted workshops at Omega Institute, Esalen, La Leche League, Hollyhock and Bioneers. I am the mother of four and grandmother of three. Please sign up for my free newsletter with the latest on parenting, activism, and healthy living.