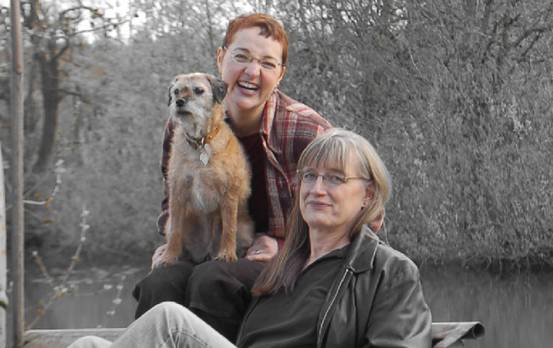 National Geographic says that its ground-breaking special issue, “Gender Revolution” is about the “shifting landscape of gender:”

“To a degree unimaginable a decade ago, the intensely personal subject of gender identity has entered the public square.”

The compelling documentary, Trans List, reminds us that our old assumptions about gender are dead. Plus, gender is reshaping marriage in profound ways. Here is an excerpt, “Seeking Support,” from an important new book, Housewife: Home-remaking in a Transgender Marriage by Kristin Collier. The photo above is of Kristin and her parenting partner, Seda.

The slow-moving effects of synthetic hormones could not possibly satisfy my partner’s desire to live in a woman’s body now. Daily, he watched his breasts from all angles, trying to determine whether they were actually growing. He wanted to be able to go out as “herself,” but his flat chest and manly haircut posed a challenge.

I decided to help. I went online and looked at wigs. Splurging (and loving it!), I bought her a shoulder-length auburn bob made of human hair. It arrived within a week, and I admit to coveting it perhaps more than I should have. It looked smashing on Seda, too.

Then, I packed up the kids, and we headed to a nearby lingerie boutique to acquire breast enhancers for our newly developing woman. I pondered whether to bring the children along on this adventure, but the dilemma I faced was emblematic of our transition as a family. Yes, I was still resistant to Seda moving forward into her life as a woman, because doing so threatened our family unit as we knew it. At the same time, Seda had been my husband of nearly fifteen years, and I daily lived the vow of supporting her. As a stay-at-home mom, my life’s work centered around serving my husband and children, and I was rarely without one or the other. How else was I to go breast shopping during business hours except with the kids? Within the scope provided by the Transfamily Spouse Yahoo group, our transition had normalized in my mind to some degree, and this accepting perspective was the one that I wanted to offer our children.

So, as a surprise for Seda, we set out to procure a “veal cutlet” style of silicone breast enhancer. According to my Transfamily Spouse sources, such enhancers could be comfortably slipped into a bra to enlarge whatever size breast Seda currently sported. The boys and I opened packages, poked, and prodded at the clear, jelly-like pancakes. The proprietor appeared and offered her help.

“You are looking for a particular style of enhancer?” she asked. “For yourself?

I looked down. Yes, I could see her point.

“Ah . . . ” she said. I was thinking fast. Who was this friend and what were her circumstances? Why hadn’t I thought of this before?

“If she’s losing a breast,” said the proprietor carefully, “then you may choose whatever style you think she would like and exchange it if it isn’t working for her later.”

“Only for a woman,” she said, looking at me intently over the top of her eading glasses. “Sometimes it is necessary. But we don’t exchange as a rule, because sometimes these are purchased . . . with other intentions.” She nodded slowly at me that I might catch her drift. She was speaking of my husband, of course.

“Yes . . . I’m sure my friend will appreciate these. It’s just what she’s looking for, I think. We’ll know for certain later when she’s further into recovery and can use them.”

The kids were feeling up the silky sleepwear and didn’t seem to notice their mother’s blushing stumble from integrity. How could I walk in better alignment with my values? This woman’s policy explicitly discriminated against transwomen. I was not going to admit to buying breast enhancers specifically for a transwoman because we lived on one salary, and if these $60 falsies didn’t work for my husband’s purposes, I wanted the exchange policy to apply to me, too.

I was scared. The shopkeeper’s response to the needs of transwomen became a frightening example of how this population—how we—could be treated in coming months and years. We weren’t even out of the closet yet, and the world already passed judgment. I kept my receipt.

A week later, I set up a date for Seda and I to go out walking together as a couple of women. At night. We all have to start somewhere on the path to honest living. I decided we would give it a go in the dark. I asked my friend Tina to watch the children for us while we went out for a stroll. She had watched our boys on the day that Seda told me she needed to transition some months ago. Tina was one of precious few who now knew our story, and I felt grateful to have her in confidence.

The big evening finally arrived, and I applied Seda’s makeup myself after she shaved twice. We affixed the wig and slipped the silicone cutlets into her new bra. Our children watched with wonder as their father transformed before their eyes for the first time. A new pair of femme eyeglasses with purple wire frames did much to soften and change the shape of her face. She looked like she could be Fred’s sister.

Arm in arm, with skirts swishing around our ankles, we stepped out the front door and into the wide world beyond. It was dark, and my husband’s auburn hair glinted in the glow from streetlamps above. Our hearts raced as we walked slowly through the park, boot heels clicking while we talked with each other quietly. This was a clandestine affair. My chest felt tight and my head spun dizzily. Someone could bash us for being gay. Someone could bash us if they recognized that Seda was trans. Or we could be valued all the more in our community for our living, breathing courage and diversity. Every step we took into the dark echoed with possibility. 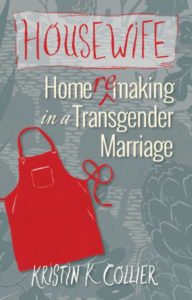 Excerpted from Housewife: Home-remaking in a Transgender Marriage by Kristin K. Collier, an educator and writer from Eugene, Oregon. Her words have appeared in The Sun magazine, and her poetry is a frontispiece for Michael and Kathleen O’Neal Gear’s People of the Sea. She has been teaching Compassionate Communication since 2004. Collier and her spouse were featured in NPR’s program, Snap Judgment, in their Valentine’s 2012 edition. As well, Collier has been urban farming since 2005 and was a keynote speaker for the Eugene Permaculture Gathering in 2007. For more information, please visit Kristin Collier and connect on Facebook, Twitter