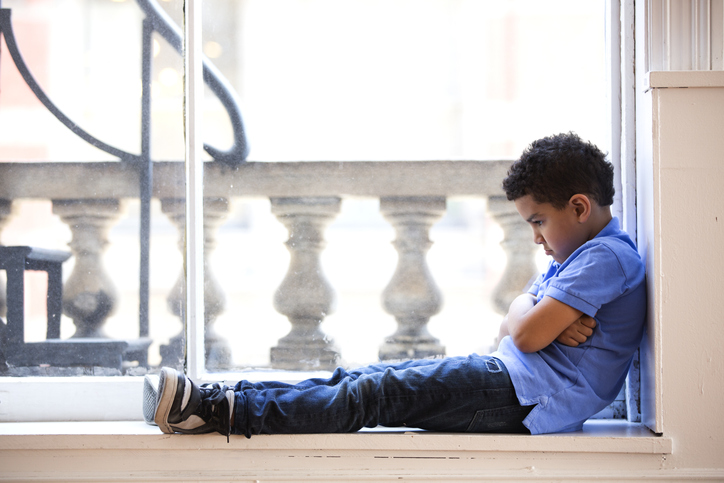 My mother told me that she was put in the closet as punishment when she was a girl. She was clearly traumatized by the experience because she spoke of it with such shame. I thought that this type of cruel treatment of children was a thing of the past until I read about Urijah Salazar, a special education student in Albuquerque, New Mexico, who has been restrained and secluded by his teachers over 150 times.

Urijah’s mother took him to the emergency room after school one day because he came home with bruises and scratches on both arms. The autistic boy, who was in a social-emotional support services classroom, had become aggressive, hitting and kicking when he was told to stop playing a computer game and return to his assignment. Two adults grabbed him and held him a “team control position” for 25 minutes—bruising and scratching his arms.

A “team control position” is a technique in which two adults pull a child’s arms backward and force the child’s head toward the ground. After the “team control position,” the adults secluded the fourth grader for 70 minutes. Seclusion rooms are often small and unventilated and may violate state safety standards. Some report seeing walls of seclusion rooms smeared with blood and mucus.

More than two-thirds of the students who are restrained and secluded are students with disabilities and they are disproportionately boys and African American or Native American, like Urjah Salazar. Students with special needs make up about 12% of the public school student population nationally, but experience 75% of physical restraint cases and 60% of seclusions, according to an analysis done by the Government Accountability Office. As a result, the NAACP, the Southern Poverty Law Center and 56 other legal and social justice organizations issued a joint statement in 2018 calling for a federal ban on these practices in public schools.

Restraint and seclusion are only intended for emergency situations and special education advocates point out that restraining and secluding students for behavior that is predictable and consistent is not only irresponsible, but also illegal. Research uniformly shows damage from restraint and seclusion. Rather than calming students down, students who are restrained and secluded are more likely to act out aggressively in the future. 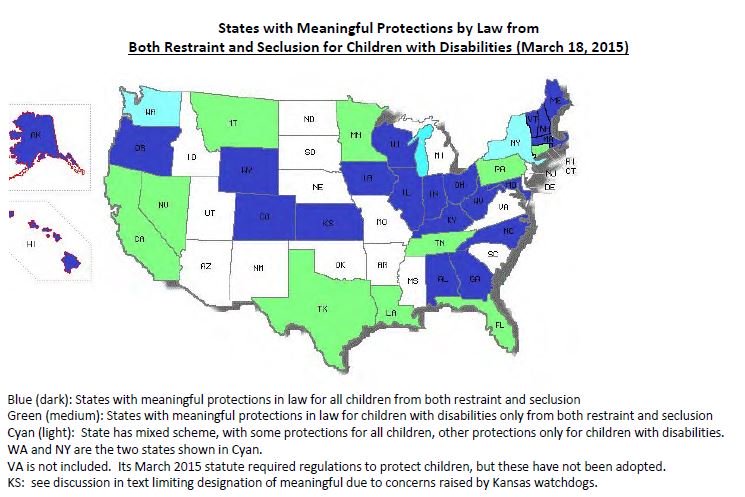 Twenty-nine states have tight limits on the use of restraint and seclusion and many state laws require schools to notify parents when restraint and seclusion is used. However, school districts across the country vastly underreport their use of these techniques. While the US Department of Education’s Office for Civil Rights requires that school districts report every time a student is restrained or secluded, nearly 80% of school districts report that they never secluded or restrained special education students. Federal bills to outlaw seclusion and protect students from restraint have been introduced for the last ten years, but Congress has yet to pass legislation to restrict the use of seclusion and restraint in schools

Evidence shows that corporal punishment is an ineffective method of discipline and has major deleterious effects on the physical and mental health of those inflicted. It does not lead to better control in the classroom and has never been shown to enhance moral character, increase the students’ respect for teachers, help the teacher to control the class or protect the teacher.

It is possible for school authorities to learn effective alternatives to corporal punishment that will benefit children. Using positive reinforcement techniques to reward appropriate behavior is more effective in the long run than methods using aversive techniques.

Punishment produces very limited results. It creates an unproductive and punitive environment in which lose their full learning potential. Students who are punished can develop low self-esteem, anxiety, depression, and PTSD.

HOW TO END RESTRAINT AND SECLUSION

The U.S. Department of Education’s offices for civil rights and for special education and rehabilitative services are teaming up to “address the inappropriate use of restraint and seclusion” on students with disabilities. On Jan. 17, 2019, the agencies outlined three areas that they will focus on:

The American Humanist Association joined with 77 other groups in on open letter calling for local, state, and federal policymakers to address the continued and damaging use of corporal punishment in both public and private schools. The Alliance to End the Hitting of Children brings together many organizations that advocate the end of the hitting of children.

To find out more: