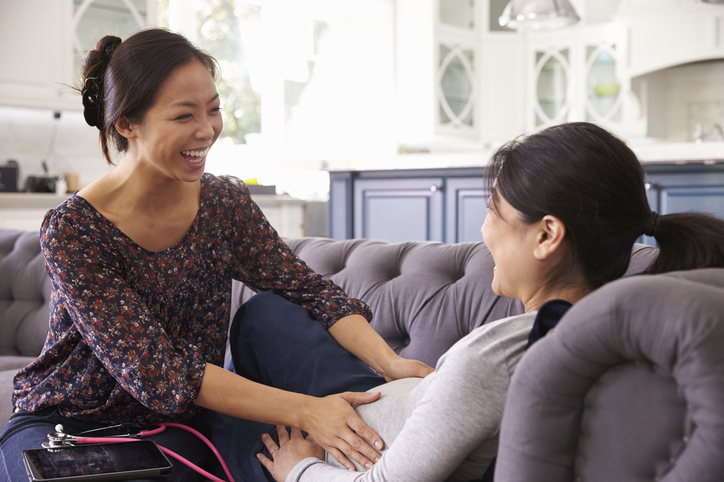 In 1932 the Metropolitan Life Insurance Company of New York issued a report in which it estimated that if services like the Frontier Nursing Service were adopted nationwide, the perinatal mortalities of the time would have been reduced by 60,000 a year. Since 1971, the maternal mortality rate of the Frontier Nursing Service has averaged better than the rest of the country and better than Sweden.

Despite the overwhelmingly good results of midwifery care—which has long been available to women in other countries—the licensure of midwives in the US was opposed by the medical establishment and midwifery care declined dramatically until the 1970s when natural living pioneers began to seek out midwives. Since 1989, the first year that CNM statistics were made available, the percentage of CNM-attended births has risen nearly every year. In 2017, CNMs attended 351,968 births, 85% of all midwife attended births and 9.1% of total US births.

There are approximately 15,000 practicing midwives in the US today. While the majority are CNMs, most CNM-attended births occur in the hospital (94.1%): less than 4% of CNM births occur out of hospital. Births at freestanding birth centers or at home, on the other hand, are usually attended by direct entry midwives, who can be certified by their state as Licensed or Registered Midwives or by the North American Registry of Midwives as Certified Professional Midwives (CPMs). According to the Midwives Alliance of North America (MANA), CPMs are legal in 35 states.

A summary of research on midwifery practice in the United States lists several advantages of midwifery care that are supported by research and scientific evidence:

In six states, more than 3% of births occurred outside a hospital in 2012:

HOMEBIRTH IS THE SAFE

In 2008, a meta-analysis of six controlled observational studies showed that for low-risk women there is no significant difference in perinatal mortality between planned homebirth and planned hospital birth.

The best and by far the largest study on homebirth is “Perinatal mortality and morbidity in a nationwide cohort of 529,688 low-risk planned home and hospital births,” published in April of 2009 in the British Journal of Obstetrics and Gynaecology (BJOG). This is a nationwide cohort study of birthing women in the Netherlands. It’s conclusion:

This study shows that planning a home birth does not increase the risks of perinatal mortality and severe perinatal morbidity among low-risk women, provided the maternity care system facilitates this choice through the availability of well-trained midwives and through a good transportation and referral system.

Low-risk women in this cohort experienced high rates of physiologic birth and low rates of intervention without an increase in adverse outcomes.

But, internationally  homebirth is not only more common than it is in the US, it is the standard.

In November 2013 Summary from the well respected Cochrane Collaboration, stated that,

Increasingly better observational studies suggest that planned hospital birth is not any safer than planned home birth assisted by an experienced midwife with collaborative medical back up, but may lead to more interventions and more complications.

In December of 2014, the UK’s National Institute for Health and Care Excellence (NICE)  issued new guidelines for the care of healthy women and their babies during childbirth. After reviewing the evidence, NICE recommended that low risk pregnant women—the vast majority of the over 700,000 women who give birth in the UK—give birth at home or with a midwife-led unit, rather than a hospital. According to the new guidelines:

Access to homebirth and midwifery care are increasingly viewed through the lens of reproductive justice in the US. The national cesarean rate has risen steadily since 1996 and is now at 32%. (12 to 15% is considered optimal). It is now the most common operation performed in US hospitals today.

Overuse of cesarean delivery and other childbirth interventions are common in the US and is associated with excess death among women and babies. Shockingly, US women have a greater lifetime risk of dying of pregnancy-related complications than women in 40 other countries. African-American women in particular are at high risk: they are nearly four times more likely to die of pregnancy-related complications than white women.

Midwifery care and access to homebirth and free standing birth centers should be available to all women in the US. When they are denied this low-risk care and are subjected, instead, to care that is not based on evidence, both their reproductive and their human rights are violated.