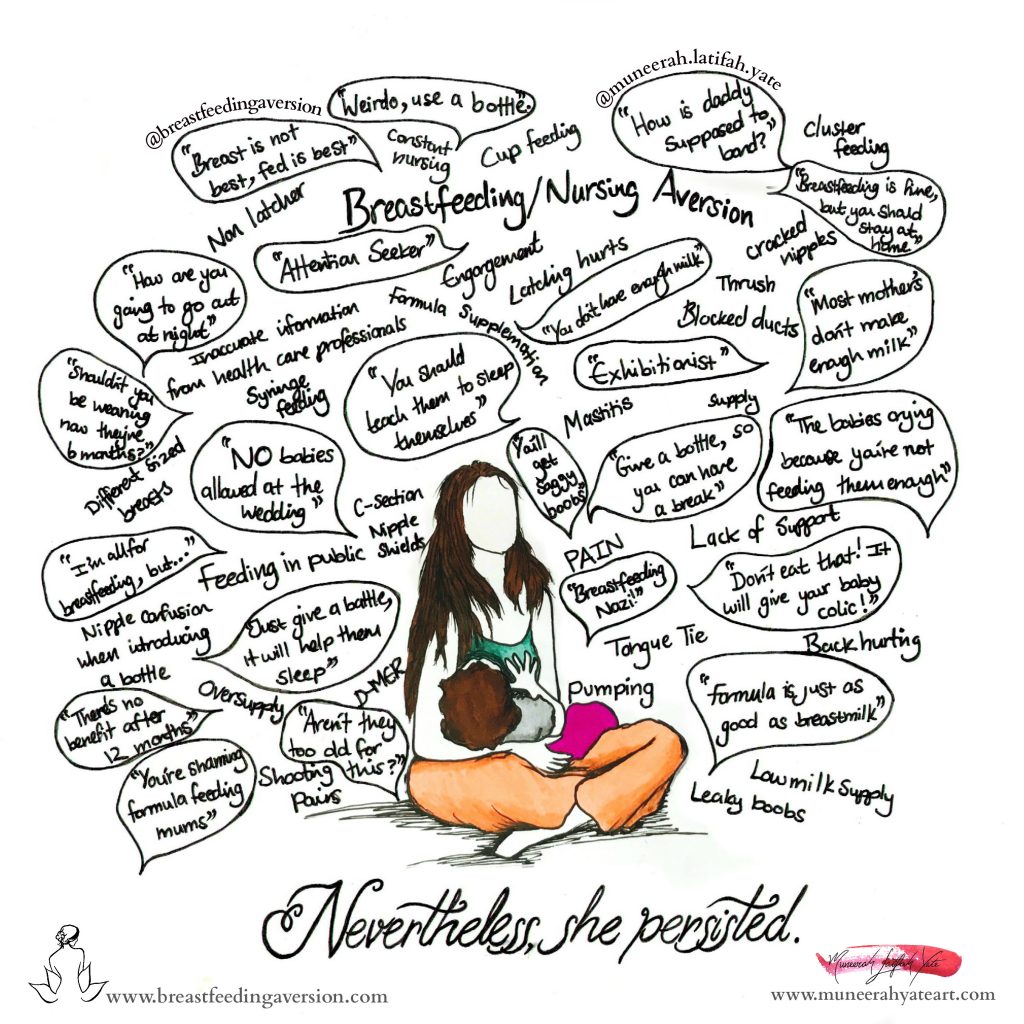 BAA or “aversion” is a phenomenon that some breastfeeding mothers experience and includes having particular negative feelings, often coupled with intrusive thoughts when an infant is latched and suckling at the breast (Yate, 2017).

The two days before I get my period, I get nursing aversion at night.  This usually feels like being very agitated, and the need to get my baby off me and what can only be described as extreme itching all over my body but under the skin. Nadia

WHAT IS BREASTFEEDING AVERSION AND AGITATION? (BAA)

These feelings are often unexpected, and almost always unwanted, as many mothers who experience aversion would like to continue breastfeeding.  Mothers can experience feelings of:

Intrusive thoughts are known to occur in motherhood (Kleiman, 2010), but with aversion these appear to be specific to breastfeeding and can include, but are not limited to:

These feelings disappear after the infant stops breastfeeding and is not latched.

The phenomenon of aversion is known to exist in varying degrees and durations, along a spectrum that is individual for each mother—as the onset and severity is unpredictable. However, the expression or manifestation of aversion is similar, with mothers describing very similar feelings and thoughts, often using the exact same phrases (Yate, 2017).

I didn’t actually know there was a term for this.  I get so angry, like a rage when my son latches now, and I am not sure why. I used to LOVE breastfeeding and we had such a good relationship. All I can think about now is leaving, running away when he suckles. Then I feel so guilty it hurts. Hanna

Mothers feel a great sense of shame and guilt due to these negative feelings and intrusive thoughts.  Many don’t tell anyone, and struggle with an “internal conflict”of wanting to breastfeed, but once engaging in the activity, experiencing aversion toward it. Some mothers have to wean due to experiencing Aversion, if it is long-lasting or severe, or if they do not know what it is. This also can cause feelings of guilt over having to end breastfeeding before a mother or infant was ready.

I am so glad I found this group (online support group), I thought I was going mad … that I was the only one who felt like this when nursing. I just want to scream and pull my baby off. Preena

Yes, in the experience of negative emotions while breastfeeding, aversion is like dysphoric-milk ejection reflex (D-MER). However, for mothers who experience aversion, there is often an overwhelming urge to de-latch the suckling infant, as once aversion hits it will not abate until the infant has stopped suckling.  In contrast, with D-MER, the experience of feelings of dysphoria when the milk releases dissipate shortly thereafter – not staying throughout the whole feed as is the case with aversion. The feelings themselves are also generally different: anger and agitation are not the same emotions as the dread, despair or sadness experienced with D-MER, although there can be crossovers. Mothers can experience both D-MER and Aversion, and at the same time, but they are different phenomena.

The paucity of research on Aversion is very apparent: there are no research studies that investigate what causes aversion experienced in this manner while breastfeeding. Only a few academic studies and books even mention it. In 2016, a small group of women were interviewed in a study that concluded that breastfeeding can trigger “negative embodied emotions”—negative feelings projected onto the infant—and aversion was referenced (Watkinson, et.al 2016).

In The Adventures of Tandem Nursing, Hilary Flower refers to women who are pregnant or tandem nursing experiencing “agitation” at the breast (Flower, 2003). However, in a study asking 694 women to describe the phenomenon of aversion, no distinction was found between mothers breastfeeding a single infant and those who were pregnant or tandem feeding. (Yate, 2017).

Possible causes from other published works in parenting and lactation that could lend some understanding about the reasons for Aversion are grouped loosely under the following categories in the study above:

Some mothers are able to tie experiences of aversion to their menstruation (even ovulation), and manage it for a few days each month, once they have identified this pattern, and they realize that it will pass. This indicates that the cause could be hormonal for some women, something perhaps similar to pre or postmenstrual stress. It is also likely to be hormonal for the women who get a bout of aversion in pregnancy. Body changes, heightened breast and nipple sensitivity, and overall energy “costs” on a woman’s body to fulfill both gestation and lactation could all plausibly playing a role (Neville, 2010.  Hinde, K, 2009, Grey, 2013).

Many women write that they experience aversion once their infant starts to get a bit older (i.e is not a baby), and they still maintain ‘feeding on demand’. There could be a number of reasons for this, including the difficulty to say no or “set boundaries” with their child, or the fact the child is less reliant on milk for survival but is still breastfeeding very frequently, even at night.

The breastfeeding relationship is an important consideration in the experience of Aversion, because if mothers have unrealistic expectations of infant sleep due to societal or cultural pressures, and are the only source of milk, this can put stress on the mother. It is plausible this stress can manifest while breastfeeding and in the interactions of the mother-infant dyad at this time, especially considering the hormone cortisol (Hinde, K, 2014).

It is well-documented that lack of sleep can affect us in many ways, including causing chronic diseases. The mothers who responded in the study would often note being sleep deprived in their responses, and how difficult it is for them to maintain breastfeeding on demand, especially at night, in this state. This is the one key area many mothers noted Aversion where would strike, often alongside not eating properly with a well-balanced diet, and not hydrating sufficiently.

Sleep deprivation or not having any time for self-care are also commonly reported as “triggers” for Aversion, including the sensations of an infant’s latch, “wandering hands” and “nipple twiddling/tweaking.” Many mothers report the precursor to experiencing aversion is that they are “touched out.” This term refers to women feeling overwhelmed by the amount of physical contact with their infants, and not being able to have any time apart/alone/for themselves without being touched. This was especially true for mothers who tandem fed, or who were breastfeeding very demanding toddlers.

There is not enough research on Aversion to know how many breastfeeding women it affects, why it affects some women and not others, and what women can do about it. There is anecdotal information that suggests cognitive distraction, taking certain supplements, and mother peer-to-peer support can help lessen the experience or manage it until it abates.

A resource page and structured support course on Breastfeeding Aversion and Agitation as well as the latest research are available to mothers to help them figure out what can help on Breastfeeding Awareness and Agitation. If you are struggling with aversion you can join a closed online peer to peer support group on Facebook (Called Aversion Sucks), or reach out on the public awareness page about aversion on Facebook, or Instagram @breastfeedingaversion. 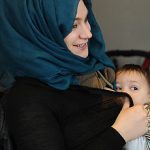 Iranian born Zainab Yate is Vice Chair of North London Research Ethics Committee, for the Health Research Authority (HRA), and a member of King’s College London (KCL) Research Governance Board in the UK.  She volunteers as a breastfeeding peer supporter with the National Health Service (NHS), and is volunteering to support the work of World Breastfeeding Trends initiative (WBTi) in the UK. As an independent researcher and research consultant, with two breastfed toddlers, she spends her free time raising awareness of Aversion and supporting mothers who experience it. Visit her at Breastfeeding Aversion and Agitation.