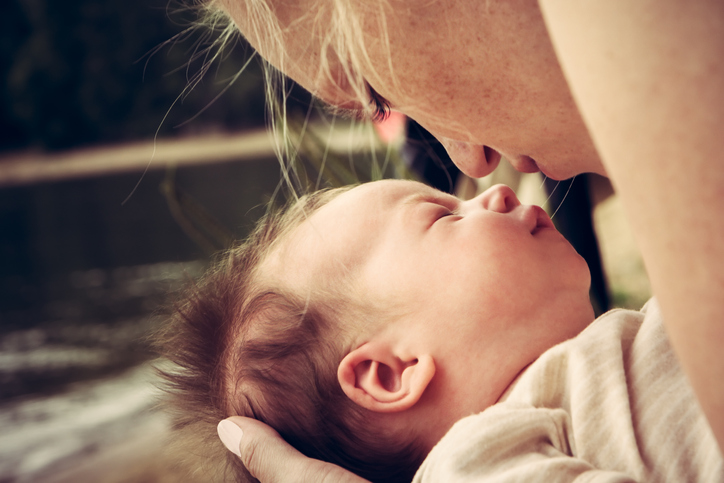 Attachment parenting is not permissive parenting. It is not about abdicating authority as a parent, but rather, it’s about responding to the legitimate biological needs of a baby. It is firmly based in the sciences of anthropology and psychology and specifically on the theory of attachment.

THE THEORY OF ATTACHMENT

The theory of attachment originated with psychoanalyst John Bowlby (1907-1990) whose influential 1951 report to the World Health Organization set the first standard for infant and child care:

the infant and young child should experience a warm, intimate and continuous relationship with his mother (or permanent mother substitute) in which both find satisfaction and enjoyment.

Bowlby and others identified the first three years of life as a critical period during which the foundation is set for attachment to self and others. Qualities secured during this period include: trust, empathy, dependency, affection, conscience and optimism. According to Maggie Scarf in Unfinished Business (Ballantine: 1981)

The ancients well knew that the experience of being in love recapitulates the mother-child relationship in its intimate physical attachment, trust and dependency. It has been shown even in the animal realm that adequate sexual functioning in adulthood depends on satisfactory relations with the mother in infancy.”

When breastfeeding rates doubled between 1972 and 1982, mothers were looking for ways to reconcile the needs of their babies with the popular wisdom of the day. Breastfeeding moms were finding, for example, that their babies wanted to be held a lot while popular wisdom warned that holding was spoiling. Attachment theory reassured these new breastfeeding pioneers that touching and holding were not only good for babies, but essential to their optimal development.

John Bowlby, for example, observed during WWI that babies in orphanages died if they were neither talked to or touched.

Bowlby’s colleague, Mary Ainsworth, was a medical researcher who observed that the indulgence of early dependency needs leads to independence and self-reliance. According to Ainsworth, it is the sensitive responsiveness of the mother that enables the child to explore the environment.

Eric Erikson identified the first year of life as a stage during which we learn to have faith in other people and in the environment. During this time of total dependency, if we receive adequate physical care that is warm, loving and demonstrative, we will learn to trust. On the other hand, if our care is cold, indifferent and rejecting we will learn to mistrust.

Margaret Mead, whose seminal book Coming of Age in Samoa (1928) informed the sexual revolution, observed in her field studies as an anthropologist that the most violent tribes were those that withheld touch in infancy.

According to neurologist Richard Restak, social behavior is related to early experiences in significant ways,

Physical holding and carrying of the infant turns out to be the most important factor responsible for the infant’s normal mental and social development.

In 1971, Ashley Montagu published his landmark book, Touching: The Human Significance of the Skin, in which he found that the skin is the oldest and most sensitive of our organs, our first medium of communication, and our most efficient protector. According to Montagu,

Handstroking or caressing the young of the human species is virtually as important as licking is to the young of other mammals.

Further evidence that touch is good for babies came in 1975, from Jean Liedloff’s book The Continuum Concept. In this international best seller, Liedloff describes her expedition to the South American jungle, where she observed the way of life of indigenous natives.

She noticed, for example, that as the mothers go about their daily tasks, they maintain nearly 24-hour-a-day bodily contact with their young infants. Liedloff also observed that the native children are unusually self-possessed and secure and concluded that close physical contact in infancy is beneficial.

While doing research for his book The Fussy Baby (1985),  Bill Sears, MD, discovered that the more frequently babies were carried, the less they cried. He also found that carrying babies facilitates breastfeeding and eases high-need situations. Sears tells the story of how his wife, Martha, instinctively tried to fashion a baby carrier from a piece of cloth in order to soothe one of their babies. In response to concerns that holding your baby can lead to an overly dependent child, Sears says that it’s just the opposite:

On the contrary, in our experience and that of others, carried babies actually turn out to be more secure and more independent. Because they have grown through early infancy with a secure home base, these children learn to separate more easily than others and with little separation anxiety.

Sears published his book, The Fussy Baby, with La Leche League (LLL) in 1985, at a time when he was the most well known of LLL’s physician supporters. He is widely credited with coining the term attachment parenting and wrote a book on the subject in 2001. But, Dr. Sears did not invent attachment parenting; it’s been around since time immemorial.

Two young moms, Barbara Nicholson and Lysa Parker, were influenced by Dr. Sears and fascinated with attachment theory. In 1987, they heard psychiatrist Elliott T. Barker give a keynote address at a La Leche League International conference on “The Critical Importance of Mothering” in which he linked adult psychopathic behavior to extreme disruptions in attachment. As Nicholson and Parker became increasingly steeped in research on the critical attachment period, they wanted to educate others, and, in 1995 they formed Attachment Parenting International (API).

API’s “principal goal is to heighten global awareness of the profound significance of secure attachment” through education, support and advocacy.

More recently, the work of Dan Siegel has broadened our understanding of how early childhood experiences shape the way we parent. In his book, Parenting from the Inside Out (2004), Siegel, and co-author Mary Hartzell, explore new findings in neurobiology and attachment research, and explain how interpersonal relationships directly impact the development of the brain.

It’s not a contest for Best Mom. It’s just information.