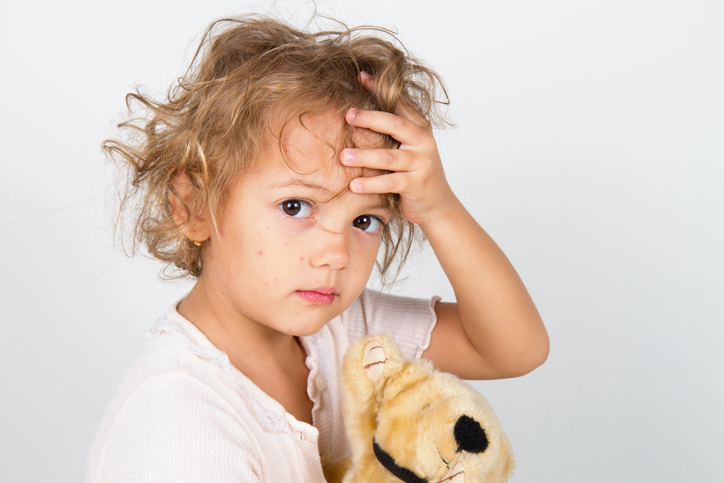 All parents want to protect their children from suffering, and yet they do so in different ways. Despite this inevitability, some news commentators use the current measles outbreak as an opportunity to attack those parents who exercise freedom of conscience and freedom of religion and do so in an especially strident and sensational way.

Writing in Forbes in 2015, Dan Diamond titles his piece, “Measles Can Kill And It’s Spreading. Sue Parents Who Didn’t Vaccinate? Absolutely…” Diamond equates measles with Ebola and confuses US measles risks with the worldwide risks.

He also recommends, as you can tell from the title, that “we” sue parents who don’t vaccinate—whether for philosophical, medical, or religious reasons. Plus he states equivocally, as do many, that “…there is no link between the measles vaccine and autism. None. Zero” so it is foolish for parents to question the safety of vaccines.

In January 2019, 79 cases of measles were confirmed in 10 states. The states that have reported cases to the CDC are California, Colorado, Connecticut, Georgia, Illinois, New Jersey, New York, Oregon, Texas, and Washington. Washington state alone has confirmed 50 cases of measles.

In the US, state and/or federal health authorities can declare an epidemic when cases of a disease exceed the expected levels. According to the CDC:

RECENT INCIDENCE OF MEASLES IN THE US

In 2014, a measles epidemic was popularly associated with Disneyland because an outbreak occurred there though the epidemic actually began in the Amish community in Ohio, with a missionary recently back from the Philippines. In fact, since 1993, most reported cases of measles have been directly or indirectly linked to international travel.

Endemic measles has been eliminated in the US since 2000, according to the CDC, but travelers can bring measles to the US from countries with measles outbreaks or epidemics. Here’s a graph from the CDC of the number of US measles cases by year. 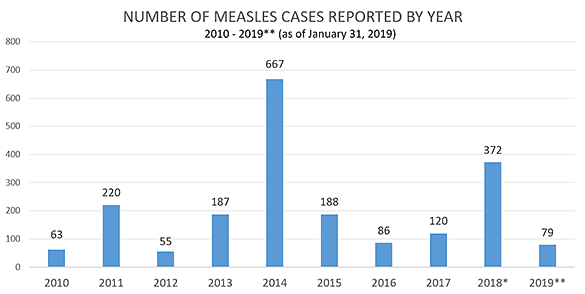 WHAT IS THE STATUS OF MEASLES IN THE US?

Prior to the introduction of the single dose measles vaccination in 1963, there were about 500,000 cases of measles a year and 500 deaths (1 in 1,000 cases). Infection with measles virus was nearly universal during childhood and considered ordinary, and more than 90% of persons were immune by age fifteen.

Between 1989 and 1991, a second dose of the vaccine was added and since 1997 the incidence of measles has remained below one case per million. During the 2014 epidemic, 667 cases were reported, the highest number in nearly 20 years. Since 1995, an average of one measles-related death per year has been reported in the US (2.54 and 2.83 deaths per 1000); pneumonia accounts for about 67% of those deaths.

About 30% of measles cases have complications such as diarrhea (8%), ear infections (7%), and pneumonia (6%) and complications are higher among young children and adults.

The measles virus is one of the leading causes of death among young children worldwide; it is still common and often fatal in developing countries. The World Health Organization estimates that there were 145,700 deaths globally from measles in 2013, about 400 deaths every day. In countries where measles has been eliminated, like the US, cases imported from other countries remain an important source of infection.

THE HEALTH OF THE UNVACCINATED

Parents are not only concerned about the unexplained increase in chronic disease, but specifically about the possibility that vaccines may have contributed to this increase. While an association between the MMR vaccine and autism has been continually debunked by the media, the evidence suggests otherwise.

African-American parents have reason to be especially concerned, as a CDC whistleblower came forward in August of 2014 to question the results of a 2004 study.

My name is William Thompson.  I am a Senior Scientist with the Centers for Disease Control and Prevention, where I have worked since 1998.

I regret that my coauthors and I omitted statistically significant information in our 2004 article published in the journal Pediatrics. The omitted data suggested that African American males who received the MMR vaccine before age 36 months were at increased risk for autism. Decisions were made regarding which findings to report after the data were collected, and I believe that the final study protocol was not followed.

Parents also worry because of MMR damage claims that have been awarded. In a 2013 landmark decision, Sadid and Parivash Mojabi of San Jose, California were awarded $969.474.91 in compensation for a severe and debilitating brain injury that their son, Ryan, suffered after administration of the MMR vaccine.

In 2012, the Italian court ruled that a child “has been damaged by irreversible complications due to vaccination (prophylaxis trivalent MMR)” and ordered the Ministry of Health to compensate the child with a 15-year annuity and to reimburse the parents for court costs.

WHO ARE THE NON-VACCINATED?

Many critics of those who choose not to vaccinate use name calling to try to shame them into vaccinating. Below are just some of the names I’ve seen used in the media to discredit conscientious objection to vaccination:

While articles and news reports about measles outbreaks and epidemics call into question the integrity of parents who do not vaccinate, Aviva Jill Romm, MD, counters this assumption,

Pediatricians need to let go of this knee-jerk reaction that parents who don’t vaccinate are irresponsible. Many of the parents I know who have chosen not to vaccinate are actually well-educated, active and contributing members of society. They are physicians, educators, people involved in government, law professors, medical professors, and academic professors.

Romm’s experience is borne out by a 2007 study in the American Journal of Public Health that found that low maternal educational levels and low socioeconomic status were associated with high vaccine compliance.

HOW MANY DON’T VACCINATE?

While more unvaccinated children will get sick when there’s an epidemic, this does not mean that they can be blamed for starting it. According to Jay Gordon, MD,

When children or babies who have been in contact with other children (or adults) contract most illnesses, there is no feasible way to know from whom they got the disease. Parents must protect infants too young to have received a full complement of shots and immuno-compromised children by keeping them away from too many other children.

We have to tolerate some disease because, even when a vaccine is as effective as the measles vaccine, it won’t work for about 2% to 8% of recipients. And, measles vaccine acquired immunity is reported to wane within 10 to 15 years after vaccination in at least 5% of cases.

A report published in 2012 by the Cochrane Collaboration reviewed 57 clinical trials and studies that involved about 14.7 million children vaccinated with the MMR vaccine. Cochrane found that:

FREEDOM OF CONSCIENCE CAN BE TOLERATED

It’s illogical to blame unvaccinated children for epidemics when they often originate in other countries. And, even though there is no endemic measles in the US, the disease can occur even among a population of 100% vaccinated, suggesting again the possibility that protection can wane over time or be less effective in some people. While unvaccinated children may have a higher incidence of the disease than their vaccinated counterparts, they cannot be blamed for causing it.

Outbreaks and epidemics of measles have increasingly become a time to demonize vaccine dissenters and call for the elimination of all but medical exemptions for vaccines. Following the measles epidemic of 2014, and the large outbreak at Disneyland, California, lawmakers passed a law eliminating religious and philosophical exemptions to vaccinations. Some now call for Washington legislators to do the same. Washington currently allows religious, medical and philosophical exemptions to vaccines, as do 16 other states

The truth is, that despite our best efforts, disease exists and with it come inevitable differences of opinion and variations in religious practices regarding how best to prevent and treat that disease. With a disease like measles that occurs once in 1,000,000 people in the US, we can certainly tolerate some conscientious objection to vaccination policy without compromising the overall health of the population.