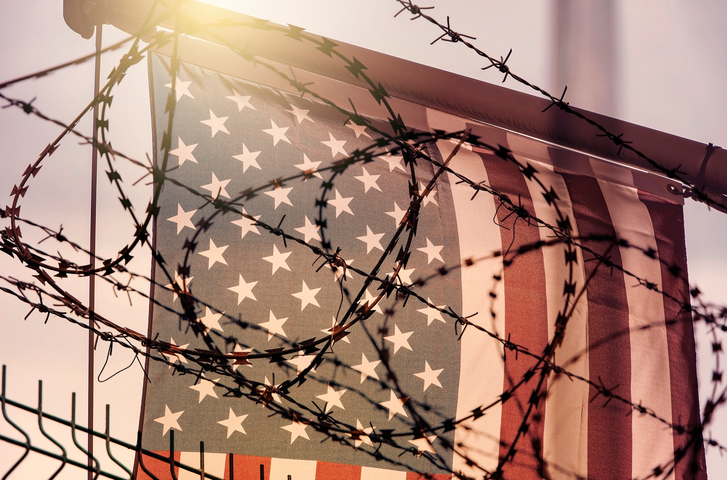 It is perfectly legal to come to the United States without papers and request asylum. Federal law says that anyone who comes to the US without legal status, and claims a fear of persecution, has the right to an interview to determine whether or not their fear is credible. If they pass the interview, they have the right to formally seek asylum. International law prohibits the US government from turning away people with legitimate humanitarian claims or from sending them back to their home countries.

An asylum seeker without papers can approach the US at an official point of entry and present herself to agents of the Custom and Border Patrol’s Office of Field Operations or she can cross into the US between ports of entry and present herself to a US Border Patrol agent. If she enters anywhere else but a port of entry, her asylum claim is still legal, but she has crossed the border illegally.

While Attorney General Sessions, President Trump and Secretary of Homeland Security Kirstjen Nielsen say that people are not crossing the border at ports of entry, a 2017 lawsuit brought by advocacy groups alleges that the federal government has been engaged in the “unlawful practice” of turning away asylum seekers coming through ports of entry since 2014. Asylum-seekers from three different countries report being told that the US government was no longer granting asylum at all or to people from certain countries. Some report being threatened with family separation for pursuing an asylum claim through a port of entry.

Documented cases of asylum seekers improperly turned away include a former Guatemalan police officer who resisted gangs, a Salvadoran child of Christian pastors who witnessed the gang murder of her sister, and a transgender woman from El Salvador, among others.

Before the Zero Tolerance policy Attorney General Jeff Sessions announced on April 6, 2018, low-risk immigrants such as children and families seeking asylum would be released to the community while they awaited hearings in immigration court rather than be held in detention. There is no actual Trump administration policy that requires those who cross the border illegally to be separated from their children. However, the zero tolerance policy that requires immigrants to be taken into federal criminal custody makes their children into unaccompanied alien minors.

Cristela Garcia [a composite] lived with her husband and two young children in El Salvador. She and her husband started a small business, but soon local gang members showed up demanding “rent.” The gang asked for more money than her husband had and when he didn’t pay, they shot him 20 times. Fearing for her life and the lives of her young children, Cristela paid a coyote to take her and her children on the 23-day journey to the United States to seek asylum.

El Salvador is the most violent country in the world outside of a war zone because of years of civil war, turf battles among rival gangs, drug cartels and a hyper-militarized police. The murder rate in El Salvador is 99.7 per 100,000, more than six times the murder rate in Chicago. By comparison, the US murder rate is 8.6 per 100,000 and the global murder rate is 7.6 per 100,000. The number of immigrants to the US from El Salvador, Honduras, and Guatemala jumped 25% between 2015 and 2017 and since October, 2017, 58,000 have arrived from these countries. Six times as many families entered the US last month as did in May 2017.

Cristela tried to enter at the port of entry, but the wait was too long for her children so she went to another border crossing  where she turned herself and her children into a Customs and Border Protection Officer. The officer took them to a detention center run by Immigration and Custom Enforcement (ICE) where Cristela and her children were processed. Because Cristela had committed a misdemeanor under federal law by crossing the border, she was arrested.

Within 48 hours Cristela was taken from the ICE Detention Center into the custody of US Marshalls for a hearing in criminal court. For her misdemeanor she could be fined or imprisoned for up to six months. If she is eligible, she may be able to post a delivery bond to ensure that she will turn up for all of her hearings. The minimum amount of the bond is usually $1500 but can be as high as $10,000. [A Facebook fundraiser, its largest ever, has raised over $18,000,000 for the Refugee and Immigrant Center for Legal Services (RAICES) to help reunite immigrant families by paying bond and legal fees.]

Because US law says that a child can’t be held in jail, Cristela’s children can’t go with her and within 72 hours they are transferred to the Office of Refugee Resettlement, a different agency from the one by which she is being detained. Trump’s order does not change zero tolerance. Cristela will still be prosecuted and temporarily removed from her children. But, as the result of Trump’s executive order, her children will remain in the ICE Detention Facility a day or two waiting for her to return rather than be moved to another facility, possibly out of state. If she had arrived in the US before Trump’s executive order, she would have been separated from her children indefinitely until her hearing date.

One of the facilities that houses separated immigrant children is Casa Padre in Houston, Texas. Casa Padre is run by Southwest Key Programs, which recently received 1.5 billion in federal money to run shelters for immigrant youth. The CEO of Southwest Key Programs (SKP) has been widely criticized because of the nearly $1.5 million in total compensation he received in 2016 as CEO of SKP, the non-profit he founded more than 30 years ago. By comparison, the head of the American Red Cross receives a salary of $600,000. Jennifer Sanchez, Juan’s wife, received $280,819 in total compensation in 2015 as vice president of SKP.

Southwest Key Programs is advertising for hundreds of positions. One of them, Youth Care Worker, pays $18 to $29.40 an hour. Its requirements include a high school diploma or GED and the ability to obtain Crisis Prevention Institute (CPI) Certification, CPR and First Aid Certification. It is preferred that the candidate have experience working with youth through paid or unpaid positions. No professional certification in education, childcare or medical care is required. Responsibilities of the Youth Care Worker include providing vocational courses and curriculum, assisting in the distribution of medications to youth, serving as a substitute teacher, assisting in the evacuation of youth as needed due to inclement weather conditions, and being “physically able to run, jump, lunge, twist, push, pull, apply SWK-approved restraint techniques and otherwise manage or coerce the full weight of an adolescent.”

What we have here is a humanitarian crisis originating in Central America, not an invasion from Mexico. We have refugees at our borders. In his executive order, Trump instructed the attorney general to ask a federal judge to change or suspend the Flores agreement. This is the court order that forbids keeping kids in detention for longer than 20 days and requires them to be held in the least restrictive environment possible. In 2016, a federal judge ruled that the Flores agreement applies to families as well. If Trump’s request to alter the Flores agreement is met, Cristela and her children will be together, but they could be detained indefinitely. Even so, Cristela believes this would be better than going back to El Salvador.