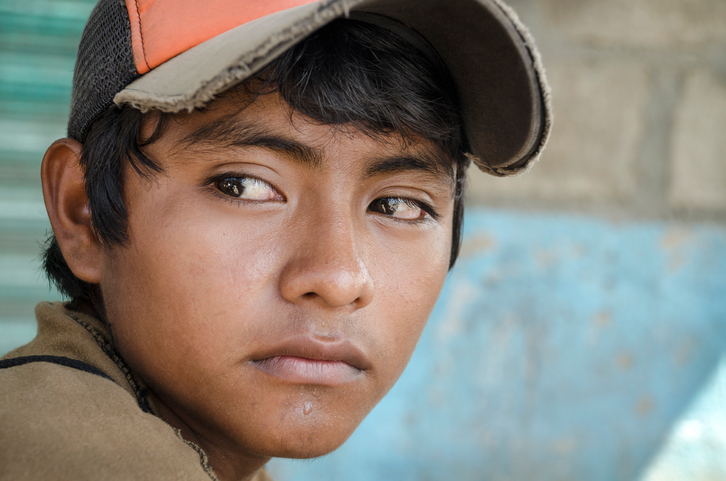 I am haunted by the sounds I heard on the news Monday night of immigrant children convulsivly sobbing in deep distress and calling for “Papa.” They have been forcibly separated from their parents and now live in fenced pens and sleep on mats on the floor covered by Mylar blankets. No one is allowed to touch or comfort them and they have no idea if or when they will be reunited with their parent(s).

On Monday, Zeid Ra’ad al-Hussein, the United Nations high commissioner for human rights, called for an immediate halt to the Trump administration policy of separating unauthorized immigrant children from their parents. He said that the practice was abusive and may cause them irreparable harm with lifelong consequences.

Dr. Colleen Kraft, president of the American Academy of Pediatrics, visited a government shelter for immigrant children in Combes, Texas this week, and told CNN:

“…”I’ve never been in this situation where I’ve felt so needlessly helpless. This is something that was inflicted on this child by the government, and really is nothing less than government-sanctioned child abuse.”

The American Psychological Association has written a letter to President Trump warning of the lasting psychological harm of family separation and asking the administration to reconsider its immigration policy.

“Decades of psychological research have determined that it is in the best interest of the child and the family to keep families together. Families fleeing their homes to seek sanctuary in the United States are already under a tremendous amount of stress. Sudden and unexpected family separation, such as separating families at the border, can add to that stress, leading to emotional trauma in children. Research also suggests that the longer that parents and children are separated, the greater the reported symptoms of anxiety and depression are for children. Adverse childhood experiences, such as parent child separation, are important social determinants of mental disorders. For children, traumatic events can lead to the development of post-traumatic stress disorder and other mental health disorders than can cause long lasting effects.”

The United States Conference of Catholic Bishops issued a statement affirming asylum as an instrument to preserve the right to life:

“Families are the foundational element of our society and they must be able to stay together. While protecting our borders is important, we can and must do better as a government, and as a society, to find other ways to ensure that safety. Separating babies from their mothers is not the answer and is immoral.”

All of the former first ladies have made statements in support of reuniting parents and children. In an opinion piece in the Houston Chronicle, former First Lady, Laura Bush, said,

“In the six weeks between April 19 and May 31, the Department of Homeland Security has sent nearly 2,000 children to mass detention centers or foster care. More than 100 of these children are younger than 4 years old. The reason for these separations is a zero-tolerance policy for their parents, who are accused of illegally crossing our borders. I live in a border state. I appreciate the need to enforce and protect our international boundaries, but this zero-tolerance policy is cruel. It is immoral. And it breaks my heart.”

This week, Maryland’s Republican governor, Larry Hogan, ordered a National Guard helicopter and its crew to return from New Mexico and refused to send any state resources to the border until the separations stop. Hogan’s actions followed those of Massachusetts Governor Charlie Baker (R) who refused to send  a National Guard helicopter and military analysts to the border because of “the inhumane treatment of children.”

And, on Monday, more than 600 clergy and lay members of the United Methodist Church brought church charges against Attorney General, Jeff Sessions, for his zero tolerance immigration policy that has resulted in the separation of children from their parents at the US-Mexico border. The formal accusation, sent to Mr. Sessions’ pastors, charges Sessions with numerous violations of the denomination’s Book of Discipline, including child abuse, immorality, racial discrimination and the dissemination of doctrines contrary to the UMC. The letters states that his

“misuse of Romans 13 to indicate the necessity of obedience to secular law is in stark contrast to Disciplinary commitments to supporting freedom of conscience and resistance to unjust law.”

When Attorney General Jeff Sessions and President Trump talk about zero tolerance for illegal immigration, they are really talking about zero tolerance for refugees and asylum seekers from Central America. The UN Refugee Agency (UNHCR) reported that 65.3 million people were displaced from their homes by conflict and persecution in 2015. This is the highest number of refugees since World War II.

The report found that, measured against the world’s population of 7.4 billion people, one in every 113 people globally is now either an asylum-seeker, internally displaced or a refugee – putting them at a level of risk for which UNHCR knows no precedent.

According to the report, forced displacement has been on the rise since the mid-1990s but has increased dramatically over the last five years. While conflicts in Somalia, Afghanistan and Syria have contributed to this displacement, so also has decades of civil war and gang violence in Central America’s Northern Triangle—El Salvador, Guatemala and Honduras. The violence in this region is the worst in the world outside of a war zone and has created a humanitarian crisis there.

Asylum seekers may include their spouse and minor children in their application. There is no fee for applying for asylum or refugee status and information is not shared with the home country. According to US Citizenship and Immigration Services,

“A refugee does not include anyone who ordered, incited, assisted, or otherwise participated in the persecution of any person on account of race, religion, nationality, membership in a particular social group, or political opinion.”

In 2016, only 13% of new green-card holders were refugees or asylum seekers. Most legal immigrants have immediate relatives in the US (48%) or enter the US through a family-based preference (20%). Another 12% enter because someone in the US wants to hire them and 4% are lottery winners.

For those with no college degree or close relatives in the US, there is almost no legal way to migrate to the US. Only one of the five categories for permanent immigration status is tailored to less-skilled workers, and is capped at 5,000 visas per year. In the case of Mexican nationals, wait times for visas under the “family preference” system can be over 10 years.

Here are some facts about immigrants from the Pew Research Center’s 2017 report, “Key findings about US immigrants.”

Both John F Kelly, Trump’s Chief of Staff, and Stephen Miller, his senior policy advisor, admit that separating children from their parents is being used as a deterrent to “illegal” entry, that is to the entry of refugees and asylum seekers. This new zero tolerance immigration program and the separation of children from their parents are pawns in President Trump’s efforts to fund his border wall. A “compromise” immigration bill currently in Congress takes a hard line. It funds the President’s wall, limits the chain of family migration and ends the visa lottery. It is uncertain whether or not it will modify the policy of splitting up families at the border. Mr. Trump signed an executive order today intended to end the separation of families, but it detains parents and children together for an indefinite period, fails to address the children already separated from their parents, and could be reversed by a federal judge.

While we wait for the political posturing and gridlock in Washington to stop, children and families are suffering. Here are some suggestions from the editors of the New York Times for what you can do now, including calling your representatives and voting for compassionate leadership the next time.