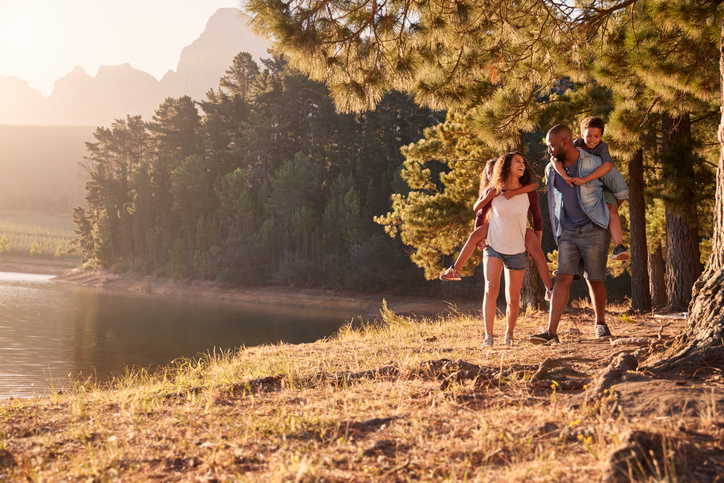 A woman I chatted with at a grocery checkout line first turned me on to the idea of a weekly “green day,” and she emphasized right away that she wasn’t referring to the color of money. In fact, she elaborated, her family was aiming to not spend any cash one day each weekend, passing the time instead in the lush—and free—setting of nature.

I was immediately smitten, as visions of sunset hikes along the Florida beaches and canoe trips through the Everglades wetlands danced in my head. Then I quickly remembered why I hadn’t done those things in what seemed like a thousand years: I had little kids! Yet so did she, and one of her babies was younger than mine.

Parents often let mental limitations constrict us more than our physical reality requires. Before we had children, my husband and I cherished walking in forests so dense we once mistook a massive rain cloud for the dark tree canopy overhead. (Did we ever get drenched!) We’d hiked to a breathtaking waterfall without a trail map, the charged ions of the misty air our sole guide. And if we didn’t have time to drive far, we’d at least head to a nearby pond to, well, ponder our connection to water and the world.

Yet in the first years after our children were born, the most “natural” place we visited regularly was a local park. Not even the greener, earthier parts of the park, but the mulched-over playground and over-sprayed ball fields. By spending more time at the shopping mall than at the shore, I had denied myself and my family the chance to commune with the energy of the vibrating ecosystem of which we are a part. I had forgotten that trees, air, and water are as nourishing as tofu, asparagus, and watercress. So what if we couldn’t hike for hours or paddle a canoe for miles? Once I opened my mind, I found a dozen places where we could go. “Family Green Days” officially went on our calendar.

One week later we got out of the car at a large nature preserve, which I had vaguely known existed but never thought to check out. Right away we saw a small baby alligator on the bank. My husband and I exchanged worried glances as our kids stood nearby; maybe we were out of our element after all. Fortunately, the gator quickly snatched up a crab and headed back into the water.

According to the trail map, an observation tower overlooking the 150,000-mile preserve of ponds and sawgrass—with what had to be dozens of varieties of birds circling overhead—was a mere mile walk over rocky ground. But after about 20 steps, I knew we wouldn’t make it.

my toddler begged, startled by a beetle that was leeched onto her shoe despite her best efforts to kick it off.

my preschool-aged son demanded, glancing back to where the baby gator had been.

My husband and I futilely tried to get them to reconsider: Your legs will get strong from walking; we won’t get to the tower with all those fun steps to climb if we have to carry you; staying close to the dirt is part of the charm. No luck. So I picked up our daughter and my husband lifted our son. We walked less than half a mile, until my arms nearly snapped. I put her down and took a seat on the ground. When my husband joined us, we realized that now, as always in life, we were already at our destination.

The four of us sat in that one spot for the rest of the day. The birds became our buddies, several showing us where they nested in the trees. Five-foot-high sawgrass danced in the breeze, choreographed to a Chopin minuet I could faintly hear. We got dirt under our fingernails scratching artwork into the earth. Many people passed us on their way to the overlook, but I’d let go of the expectation that we would get there, so I didn’t care. Sure, climbing above this eerily unspoiled wonder would have been marvelous, but rather than an aerial view we saw tiny treasures on the ground.

A few weeks later we went to an area of Everglades National Park that has a tram ride. Seated comfortably in the open-air car, we meandered seven miles into the heart of the “swamp”—a word once as pejorative as calling an elderly woman a crone, but now embraced (ironically, as is crone) as a vibrant ecosystem that is, sadly, shrinking. We passed deer, rabbits, giant turtles, alligators, and numerous birds. A large anhinga bird stopped on a small log right beside us, stabbing his bill into the water and coming up with a flailing fish.

I could see awe on my kids’ faces as they understood that the world equally belongs to these peaceful creatures, and that tuning to the environment opens our hearts. As we headed back to the now-crowded parking lot, I was hit with the same jarring sensation I used to feel years ago when my husband and I lived in New York City and would come back from our frequent trips to the Adirondack Mountains. After driving miles on roads lined with farms and fields, we would enter the concrete city. I would immediately feel my breath grow shallower as I switched from the rhythm of nature to that of man.

When the tram made its final stop and we gathered our things to disembark, my young daughter wouldn’t move. “More,” she said simply. You bet. 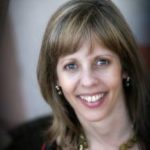 Meryl Davids Landau is the mother of two and the author of the new book Enlightened Parenting: A Mom Reflects on Living Spiritually With Kids. Her prior book is the acclaimed spiritual women’s novel Downward Dog, Upward Fog. An award-winning writer, Meryl’s work has also been published in numerous national publications, including Glamour, Redbook, O: The Oprah Magazine, Parents, Self, and more. She also blogs at Huffington Post.  Learn more about her writing at MerylDavidsLandau.com. And visit her Facebook Page.