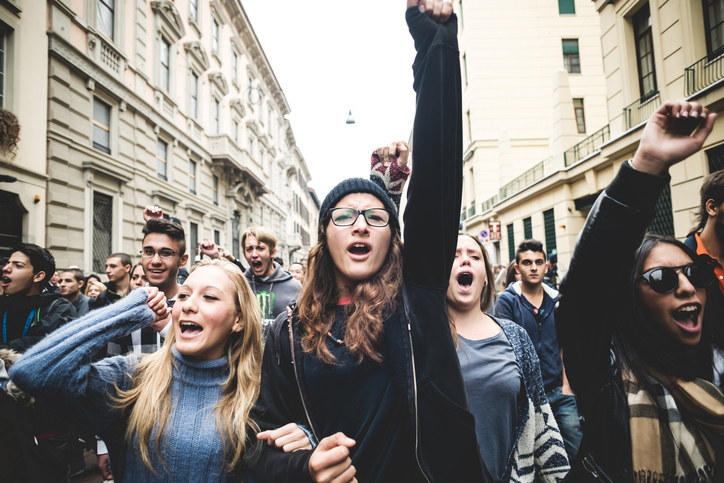 Nearly 200,000 students walked out of class on March 14th to protest gun violence (#ENOUGH) in the United States. The country has a rich history of student activism and protests. Students led the movement for school segregation in the 1950s and for voting rights in the 1960s. A student movement arose in the 1960s to demand free speech on college campuses and an end to the Vietnam War. And, fifty years ago this month, in the first walkout of its kind, thousands of Chicano high school students from Los Angeles walked out to protest racism and failing schools.

While the US Congress has failed to pass any legislation on gun control since the Sandy Hook shootings six years ago, the majority of Americans favor stricter gun laws— 60% according to a 2017 Gallup poll. Though opinions vary by party affiliation, according to a 2017 Pew Research Center study:

GUN VIOLENCE IN THE US

Americans own half of the world’s guns. The US has the 37th highest of gun violence rate in the world, eight times greater than Canada, and 27 times greater than Denmark. While the US has more guns per capita than the residents of any other country, it will surprise you to know that we’ve had a massive decline in gun violence in the US over the last 25 years. In 1993 there were 7 firearm homicides per 100,000 people; in 2013 that number had dropped by nearly half to 3.5 firearm homicides per 100,000.

any incident in which four or more victims are killed with a firearm within a 24-hour period at a public location in the absence of other criminal activity (robberies, drug deals, gang “turf wars”), military conflict or collective violence.

“Research shows that the number of victims killed and wounded are the strongest predictors of the extent to which a mass killing gets reported by the news media. Recent growth in the number of catastrophic mass public shootings—combined with the extensive, wall-to-wall news coverage that accompanies these tragedies—likely accounts for the commonly held misconception that mass shootings are now more frequent.”

GUN USE IN THE US

When the public conversation demands gun reform, gun sales increase, but overall, gun ownership among Americans is at an all-time low. In the 1970s about half of American owned guns; now 30% do. And, the population that owns guns is getting older; fewer young people buy guns. Here are some demographics of gun ownership from Pew Research:

According to the United Nations,

“…homicide is much more common in countries with low levels of human development, high levels of income inequality and weak rule of law than in more equitable societies, where socio-economic stability seems to be something of an antidote to homicide.”

GUN LAWS AND DECREASE IN VIOLENCE

Firearm deaths are significantly lower in states with stricter gun control legislation, especially in states that:

California does even more:

WHAT THE STUDENTS WANT

The National Student Walkout demanded only three things from Congress:

Students do not want teachers to be armed. They fear that this will make schools feel like prisons and have detrimental effects on students of color. To find out what you can do to support the students, go to the National School Walkout website, elect public officials committed to gun violence reform, and run for office yourself.