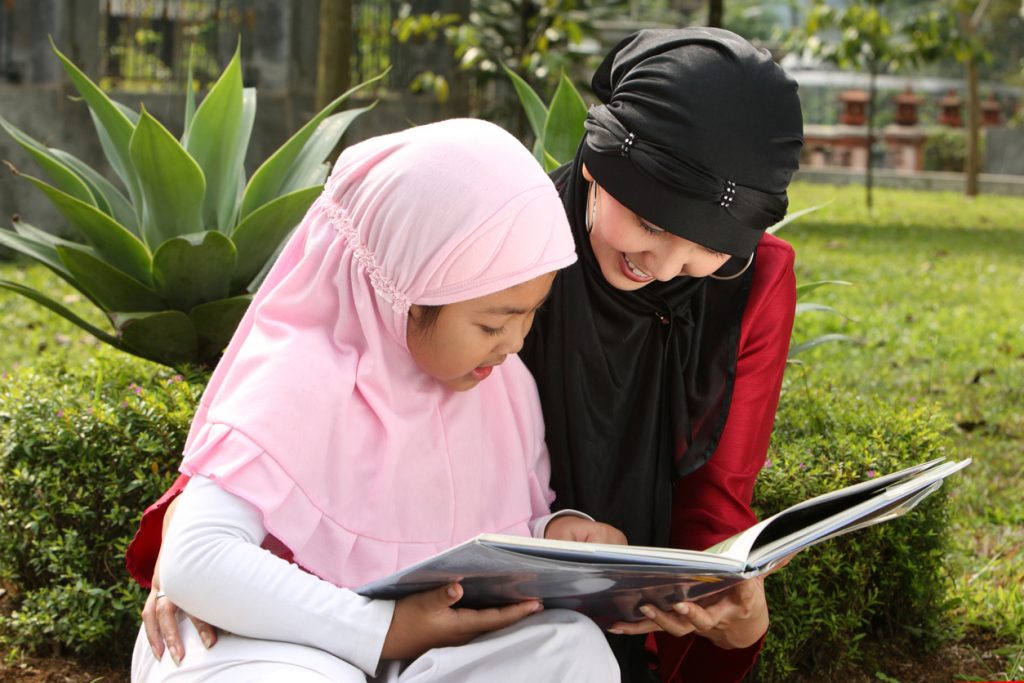 The American Library Association (ALA) announced the 2018 winners of the Caldecott, Coretta Scott King, Newberry and Printz awards as well as other awards for the top books, video and audio books for children and young adults. The ALA awards are recognized worldwide for the high quality they represent and help parents and educators choose the best material for youth. Here are the 2018 winners. For more information on the ALA youth media awards and notables, please visit www.ala.org/yma.

The John Newberry Medal for the most outstanding contribution to children’s literature: 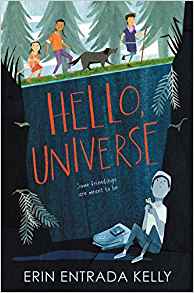 Hello Universe is the story of four “misfits,” Virgil Salinas, Valencia Somerset, Kaori Tanaka, and Chet Bullens. The book celebrates bravery, being different and finding your inner bayani (hero). In one day, four lives weave together in unexpected ways. Chet pulls a prank that puts Virgil in danger and leads the others on an epic quest. Eventually the bully is put in his place and friendship blooms. This book has everything: humor, bullying, cross-generational relationships and a smart, fateful ending. The acclaimed author of Black Bird Fly and Land of Forgotten Girls, writes with an authentic, humorous and irresistible tween voice.

The Randolph Caldecott Medal for the most distinguished American picture book for children. 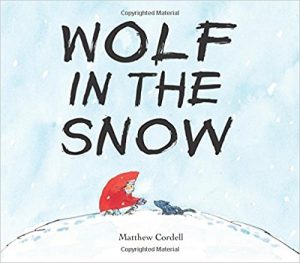 This is the story of a girl and a wolf cub, both lost together in a snowstorm. We hear the cub whine, the pack howl, and the snow swirl. Wolf in the Snow is a tender story of kindness and cooperation told with pen-and-ink-with-watercolor illustrations that capture cold, fear, exhaustion and relief. The handlettered, inky text is wordless except for sound effects. This suspenseful heroic journey tells a story of friendship and trust. 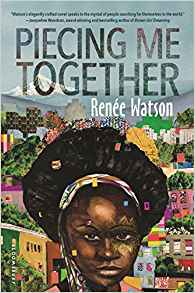 Renee Watson is the acclaimed author of the teen novel, This Side of Home and two picture books: Harlem’s Little Blackbird and A Place Where Hurricanes Happen. Piecing Me Together is about a girl caught between two worlds. She believes that she must get out of her poor neighborhood if she’s going to succeed so she rides the bus everyday to a private school where she has plenty of opportunities. But, she resents being called “at-risk” and wonders if her mentor really understands her just because she’s black. Jade only wants to speak, create and express her pain and her hope. She wonders if she may have something to share with other women. 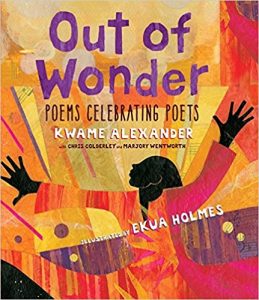 Out of Wonder includes 20 poems written by the authors in the style of their favorite poets, beginning with “How to Write a Poem” (in the style of Naomi Shihab Nye) by Kwame Alexander. The criteria for selection was that the poets had to be interesting people and the authors had to passionately love their poetry. Included are Emily Dickinson, Billy Collins and Chief Dan George, among others. Some of the celebrated poets lived centuries ago and wrote in languages other than English; others live today. The spirited mixed-media images by Ekua Holmes create a riot of color, texture and pattern that celebrate the poems and invite the reader to participate. 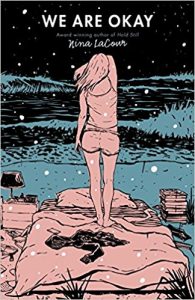 This acclaimed book is an achingly beautiful novel about grief and the enduring power of friendship. Marin hasn’t spoken to anyone from her old life since the day she left everything behind. No one knows the truth about those final weeks. Not even her best friend Mabel. But even thousands of miles away from the California coast, at college in New York, Marin still feels the pull of the life and tragedy she’s tried to outrun. Now, months later, alone in an emptied dorm for winter break, Marin waits. Mabel is coming to visit and Marin will be forced to face everything that’s been left unsaid and finally confront the loneliness that has made a home in her heart.

Schneider Family Book Award for books that embody an artistic expression of the disability experience: 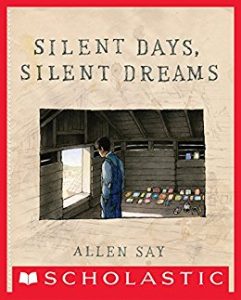 James Castle was born two months premature on September 25, 1899, on a farm in Garden Valley, Idaho. He was deaf, mute, autistic, and probably dyslexic. He didn’t walk until he was four; he would never learn to speak, write, read, or use sign language.Yet, today Castle’s artwork hangs in major museums throughout the world. Caldecott Medal winner Allen Say, author of the acclaimed memoir, Drawing from Memory, takes readers through an imagined look at Castle’s childhood, allows them to experience his emergence as an artist despite the overwhelming difficulties he faced, and ultimately reveals the triumphs that he would go on to achieve.

Odyssey Award for best audiobook produced for children and/or young adults, available in English in the United States: 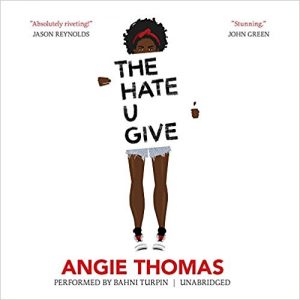 This groundbreaking, thought-provoking debut novel inspired by the Black Lives Matter movement, is about a teen girl who is the only witness to her unarmed friend’s fatal shooting by a police officer. Soon afterward, Khalil’s death is a national headline. Starr’s best friend at school suggests he may have had it coming. When it becomes clear the police have little interest in investigating the incident, protesters take to the streets and Starr’s neighborhood becomes a war zone. What everyone wants to know is: What really went down that night? And the only person alive who can answer that is Starr. But what Starr does — or does not — say could destroy her community. It could also endanger her life. 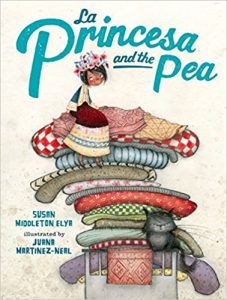 This bilingual retelling of the classic Princess and the Pea is a charming twist on the old tale. El príncipe knows this girl is the one for him, but, as usual, his mother doesn’t agree. The queen has a secret test in mind to see if this girl is really a princesa. But, the prince might just have a sneaky plan, too. The vibrant art inspired by the culture of Peru. 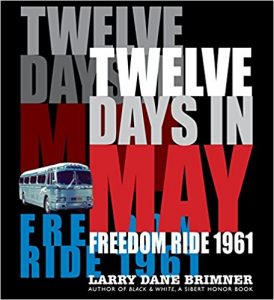 On May 4, 1961, a group of thirteen black and white civil rights activists launched the Freedom Ride, aiming to challenge the practice of segregation on buses and at bus terminal facilities in the South. The Ride would last twelve days. Despite the fact that segregation on buses crossing state lines was ruled unconstitutional by the Supreme Court in 1946, and segregation in interstate transportation facilities was ruled unconstitutional in 1960, these rulings were routinely ignored in the South. The thirteen Freedom Riders intended to test the laws and draw attention to the lack of enforcement with their peaceful protest. As the Riders traveled deeper into the South, they encountered increasing violence and opposition. Noted civil rights author Larry Dane Brimner relies on archival documents and rarely seen images to tell the riveting story of the little-known first days of the Freedom Ride. With author’s note, source notes, bibliography, and index. 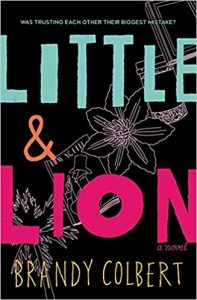 This is a stunning novel on love, identity, loss, and redemption. When Suzette comes home to Los Angeles from her boarding school in New England, she’s isn’t sure if she’ll ever want to go back. LA is where her friends and family are (as well as her crush, Emil). And her stepbrother, Lionel, who has been diagnosed with bipolar disorder, needs her emotional support. But as she settles into her old life, Suzette finds herself falling for someone new…the same girl her brother is in love with. When Lionel’s disorder spirals out of control, Suzette is forced to confront her past mistakes and find a way to help her brother before he hurts himself–or worse.

Theodor Seuss Geisel Award for the most distinguished book for beginning readers: 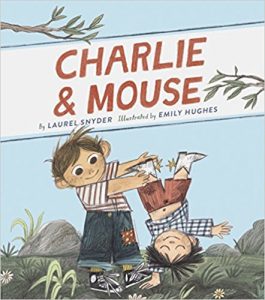 Four hilarious stories, two inventive brothers, one irresistible book! Join Charlie and Mouse as they talk to lumps, take the neighborhood to a party, sell some rocks, and invent the bedtime banana. With imagination and humor, Laurel Snyder and Emily Hughes paint a lively picture of brotherhood that children will relish in a format perfect for children not quite ready for chapter books.

YALSA Award for Excellence in Nonfiction for Young Adults: 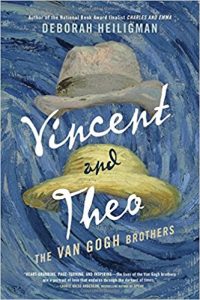 Vincent and Theo: The Van Gogh Brothers
by Deborah Heiligman
464 pages
Ages 18 and up

The deep and enduring friendship between Vincent and Theo Van Gogh shaped both brothers’ lives. Confidant, champion, sympathizer, friend―Theo supported Vincent as he struggled to find his path in life. They shared everything, swapping stories of lovers and friends, successes and disappointments, dreams and ambitions. Meticulously researched, drawing on the 658 letters Vincent wrote to Theo during his lifetime, Deborah Heiligman weaves a tale of two lives intertwined and the extraordinary love of the Van Gogh brothers.