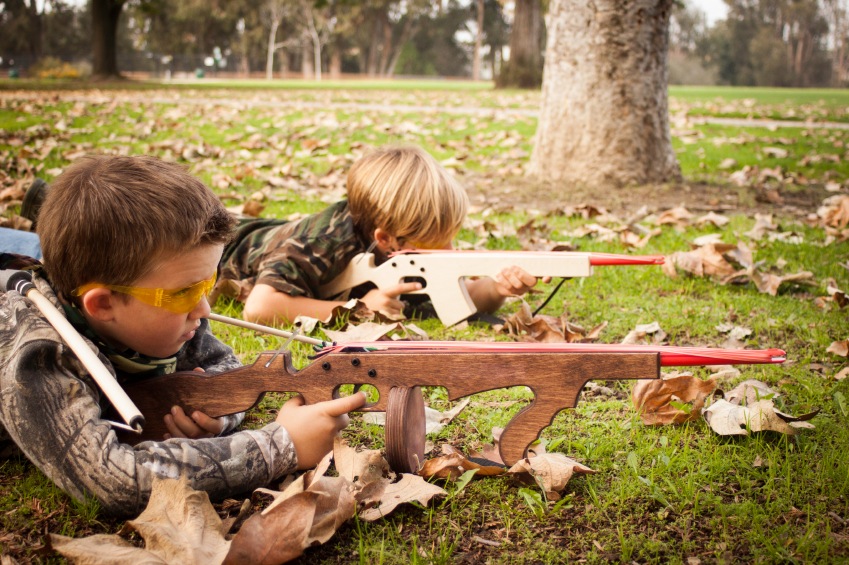 Highly realistic toy guns, computer and video games of mass destruction, and soldier action figures are some of the most popular items in toy stores today. Do these war and weapon toys promote violence and aggression in children?

We know that watching media violence can make children more violent, but what about their spontaneous play? Even when they’re not exposed to media violence, children have a natural impulse to brandish weapons as a way of expressing themselves. Many  children go through a fascination with guns, swords, or knives, usually around age two or three, when they are beginning to  develop a self-identity. The play weapons they construct out of sticks, blocks, or even bananas allow them to practice asserting some power and control over a  big world.

Censuring play weapons in the name of nonviolence may be worse than allowing them. Children’s interest in weapons is usually much more innocent than what adults read into it as they are readily able to distinguish between make-believe play and real violence.

Nancy Carlsson-Paige and Diane Levin, authors of The War Play Dilemma: What Every Parent and Teacher Needs to Know, say that homemade weapons go back to being sticks or blocks when children are finished play-fighting with them, while toys such as action figures or guns remain a constant invitation to violent play.

Research shows that it’s not the kids who are interested in toy weapons who become violent, however. Rather, the children who are more likely to use real guns as adults:

“the antidote to the epidemic of violence is interested, involved adults who affirm a child’s fantasies, model nonaggressive behavior, and mentor a child’s skills and interests.”

Although you cannot prevent your children from making play weapons, you can lay down some ground rules regarding their use–such as not using them to hurt animals, each other, or any living thing. Here are some other suggestions:

Understand that for young children, who often feel small and powerless, playing with weapons can make them feel strong and in control.  Mock battles, and sword fights teach self-limiting behavior, and play wrestling is a very effective socialization technique because it teaches limits and holding back.

I once told my son why I was worried about his playing with GI Joes, and he said to me earnestly, “Mom, I’m not into war.” Here’s another mother’s story (Marilyn Kaggen, “Badoom!,” Mothering, Fall 1990).

I hate violence, am terrified of guns, and see war as a childish, ineffectual, and largely male response to conflict. I’m an unconditional pacifist.

My son, however, is not. At nine months he crashed his trucks, and at 15 months he added the staccato effects of a battlefield. At two, he “badoom!ed” with guns fashioned from Legos, Tinkertoys, and blocks. My stomach sank with each badoom, and I pontificated endlessly on the dangers of guns, to which he replied, “But Mama, it’s only make-believe.”

I have come to believe that it is okay to let my son, who is now four and is not at all violent or aggressive toward his playmates, enjoy weapons. And I felt much better about things when I overheard this backseat conversation between him and a seven-year-old friend:

“Maybe I’ll get to fight in a war with rifles like yours!”

“But real wars are terrible,” replied his friend. “You could get killed. If one side threw out their guns, and then the other side did, there wouldn’t be any more wars.”