Pregnant plush toys like Margo the “Are You Kidding?” Goat aren’t anything new in our household. When my daughter was three, she had a maternity ward full of plushies! Vivi has always been an inquisitive child. At a very young age, she already had a keen interest in baby animals and their mothers. When she asked, “Where do babies come from?” I not only told her the truth, I made her several toys to demonstrate live birth.

I wasn’t satisfied with the zippered-belly “Puppy Surprise” and “Kitty Surprise” toys that were available at the time, so I made my own. I went to the Salvation Army and dug through the piles of used stuffed animals they had for sale. I was looking for mom and baby pairs of animals, which was surprisingly easy! I found big horses and little horses, big dogs and little dogs; even a large arctic seal and matching baby. I opened up the rear seams of the larger toys (the mommas), took out some stuffing, and sewed in a “sock womb” to hold the smaller (baby) toys. Vivi LOVED IT!

Fast forward a couple years. We moved out of the city onto a little family farm where we experienced a real live animal birth. In the early spring of 2013 the whole family witnessed (and helped with) the birth of baby goats on our farm for the very first time. It was truly amazing. I felt a connection to the natural world that I had never felt before. We learned so much in those first few minutes.  As a 40-something mom, I noticed the instant bond forming between the momma goat and her kids. 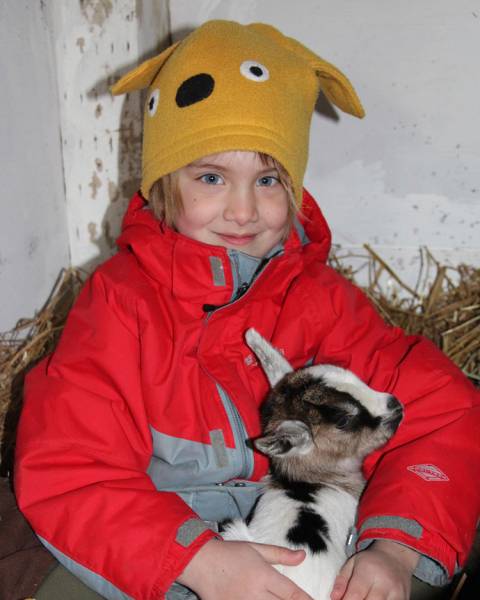 My children were 6 and 7 at the time, so they were even more intrigued with the birth process and with those tiny babies. We homeschool the kids, so I could happily check the box for science that day. For my little biology student, Vivi, this event became the center of a homeschool project that lasted a couple of months. Vivi is also an artist, so she started drawing pictures of the births which turned into a storyboard. We worked together on a children’s storybook titled, “Are You Kidding?” Vivi drew the pictures and I wrote the words. And then I decided to design a plush toy to go along with the book. 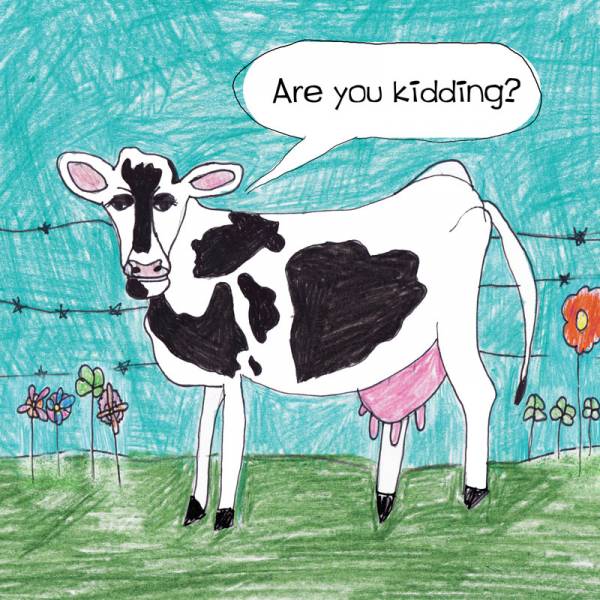 Because I wasn’t just re-engineering used toys from the thrift store like in the past, I decided to add a nursing feature. Watching the newborn kids nursing, it was clear to us how important that bond was between the mommas and babies. Originally, I thought the nursing could be accomplished via magnets (as it is with some other toys), but several people asked me to reconsider due to safety concerns of possible ingestion. We have dogs, and they love to eat stuffed animals when we’re not looking. Plastic snaps are safer. While the learning curve for connecting the snaps is a bit steeper than magnets, they provide a nice latch and it’s a good fine-motor skill for kids to practice. And the snap-on nursing feature provides an opportunity for kids to learn about bonding, nourishment and where milk comes from. 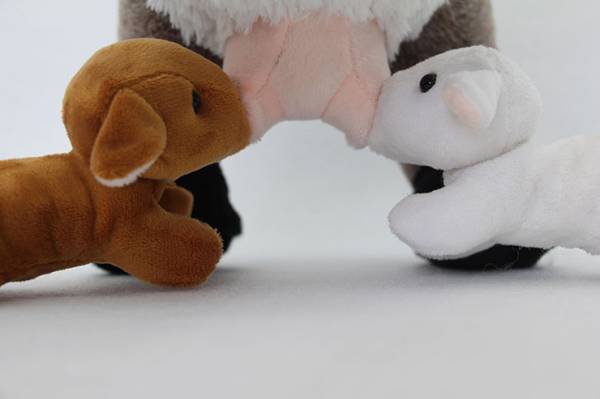 Originally, my motive was just to make a book and toy that would give children a glimpse of farm-life and teach about the birth of baby animals. Since we’ve been showing the book and toy to people, we’ve discovered people also use them to help normalize birth and nursing. I think birth is beautiful and amazing and is something that should be celebrated! While most people who see the toy agree, occasionally I have been surprised to find that for some folks, birth is shameful and somehow inappropriate for children.

Obviously, I disagree. I’m not quite entirely sure where the shame comes from. My guess is that it can be difficult for some adults to separate birth and sex. In my mind, and in my experience with kids, they are separate things. “Where do babies come from?” isn’t the same question as “How did the baby get in there?” While the first question is one Vivi began asking around three, the second question usually doesn’t occur to kids until the age of 8 or later. Adults who haven’t helped children through these different developmental stages sometimes hear the second question when the child is really only asking the first. 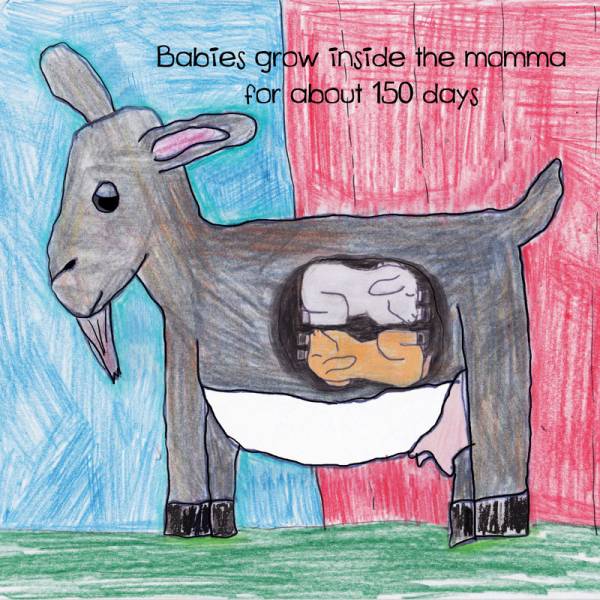 Personally, I’m not intimidated by either question. Each one seems to arise at the proper time. A toy that gives birth doesn’t cause a child to think about sex, in my experience. And since we live on a farm now, there are fewer questions regarding reproduction. It’s just part of nature. Goats give birth to kids, and then feed and care for them. 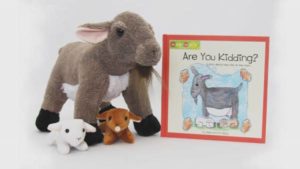 The “Are You Kidding?” Plush Playset and Book can prepare siblings for the arrival of a new baby and help children understand the birth process – in the best way possible! It’s a useful, fun educational gift, especially for those planning a homebirth where siblings are likely to be present. To learn more or order, please visit us at Gardenagerie. 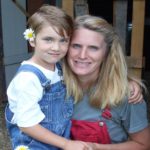 Stephanie Allesso and her family run an independent toy and book store, Gardenagerie. The business is named after their “little hobby farm” in northern Minnesota, which is partly a garden and partly a menagerie of animals. The inspiration for the toy and book came when their favorite goat, Margo, had her first kids. Stephanie’s daughter, Vi, and her (pictured at left) were inspired by Margo’s tenderness to write and illustrate the picture-book, Are You Kidding? and to develop a toy to accompany the book. They hope to bring a bit of the farm experience to you and your children.