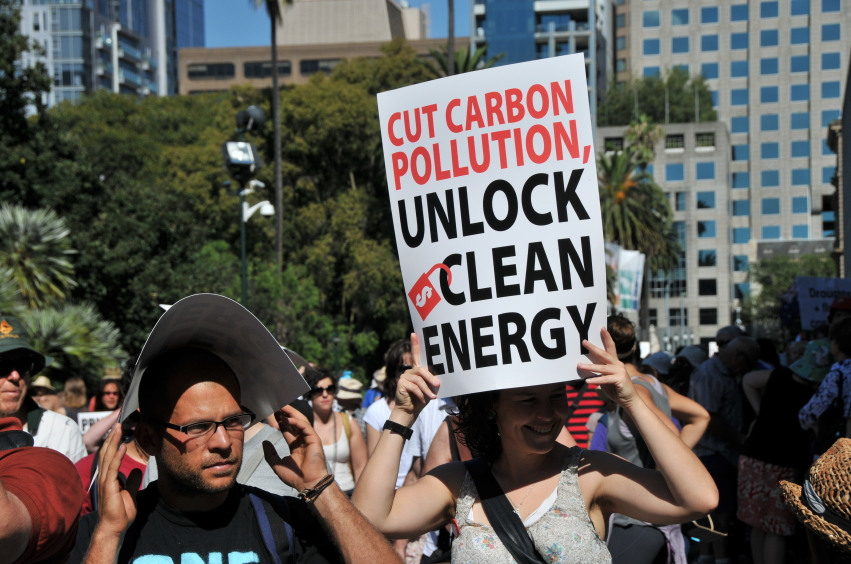 The climate change conversation is heating up in anticipation of the UN Summit on Climate Change currently taking place in Paris. Pope Francis, who addresses the US Congress on Thursday, hopes that his encyclical “Laudato Si (Be Praised), On the Care of Our Common Home” will be part of the debate. In the encyclical he speaks of “the urgent challenge to protect our common home” and calls for sustainable development. From his encyclical:

“The climate is a common good, belonging to all and meant for all….A very solid scientific consensus indicates that we are presently witnessing a disturbing warming of the climatic system. Humanity is called to recognize the need for changes of lifestyle, production and consumption, in order to combat this warming or at least the human causes which produce or aggravate it.”

The Pope’s message is right in step with the decline of the coal industry and the stunning rise of the renewable energy sector. According to Bloomberg Business, fossil fuels have lost the race against renewable energy:

“The race for renewable energy has passed a turning point. The world is now adding more capacity for renewable power each year than coal, natural gas, and oil combined. And there’s no going back.”

The shift occurred in 2013, when the world added 143 gigawatts of renewable electricity capacity, compared with 141 gigawatts in new plants that burn fossil fuels, according to an analysis presented in April at the Bloomberg New Energy Finance annual summit in New York.

THE END OF COAL

Cheap coal is a lie. While global funding of coal-fired power companies remained steady in 2014, there are signs of cracks in the dam. At least seven banks have backed out of lending to Australia’s controversial Galilee Basin coal mine. And, in May, Bank of America—once labeled “Bank of Coal”— committed to reducing exposure to coal mining companies across the board. According to Andrew Plepler of Bank of America:

This policy change comes after four years of campaigning from Rainforest Action Network and other groups, and is the strongest policy of its kind to date.

The coal sector is performing very badly. The 200th US coal plant was recently shut down and 40% of the 523 American coal plants in operation five years ago are now being phased-out. Universities such as Oxford, Stanford and Georgetown have divested from coal and Norway has divested its $890 billion government pension fund. According to Bloomberg New Energy Finance, as many as 200 organizations have pledged to cut back or eliminate investments in coal or in fossil fuels.

US coal is an easy fossil fuel to divest from not only because of climate change, but also because the coal industry is in decline and coal is beginning to be seen as a risky investment. Coal plants are being shuttered thanks to a combination of low natural gas prices, aging coal plant infrastructure and new emissions and pollution standards, which older plants can’t meet without expensive upgrades.

Two Appalachian mining companies filed for bankruptcy earlier this year, and Murray Energy Corporation laid off more than a fifth of its workforce. In August, Alpha Natural Resources (ANR), the country’s biggest miner of coal used in steelmaking, filed for bankruptcy. In the bankruptcy filing, Kevin Crutchfield, the company’s chairman and CEO, described “unprecedented changes” for the coal industry. He said,

“The US coal industry as currently structured is unsustainable.”

In 2015, US coal production is expected to fall 7%, according to the US Energy Information Administration.

Under the visionary leadership of Mayor R. Rex Paris, Lancaster, California—an ultra-conservative, Republican, poor city—has achieved net zero. This means that they produce as much energy as they consume. A new ordinance requires all new houses in Lancaster to be net zero. The new film, The Future of Energy, details these hopeful developments.

THE FUTURE OF ENERGY

Eight hundred US businesses, including BMW, Stables, and IKEA, have committed to going 100% renewable. While the US as a whole is only 13% renewable, Mark Jacobson of Stanford has a 50-state roadmap for transitioning the US from dependence on fossil fuel to 100% renewable energy by 2050. Go to Go100%RenewableEnergy to monitor renewable progress here in the US and around the world.

WHAT YOU CAN DO LOCALLY

If you’d like to become involved, here are some suggestions for actions on the personal, city and county level.

To learn more about climate change, here are some sites run by moms and dads who are on the front lines of climate change activism.

Peggy O’Mara is the editor and publisher of peggyomara.com. She was the editor and publisher of Mothering Magazine from 1980 to 2011 and founded Mothering.com in 1995. The author of Having a Baby Naturally; Natural Family Living; The Way Back Home; and A Quiet Place, Peggy has conducted workshops at Omega Institute, Esalen, La Leche League, and Bioneers. She is the mother of four and grandmother of three.