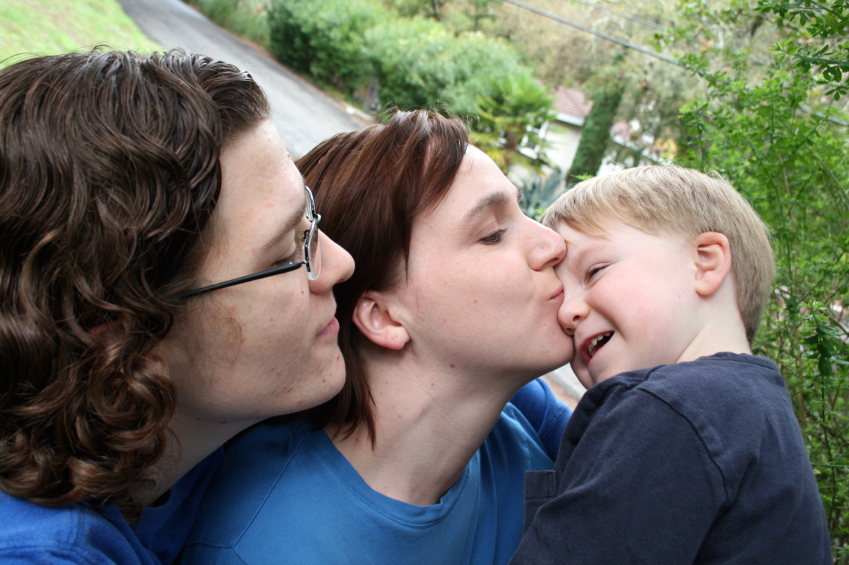 In the historic decision by the Supreme Court to recognize that the Constitution guarantees the right to same-sex marriage, Justice Kennedy said that marriage is especially important to couples raising children:

“Without the recognition, stability, and predictability marriage offers,” he wrote, “their children suffer the stigma of knowing their families are somehow lesser. They also suffer the significant material costs of being raised by unmarried parents, relegated through no fault of their own to a more difficult and uncertain family life. The marriage laws at issue here thus harm and humiliate the children of same-sex couples.”

At the heart of many people’s concerns about gay marriage, is the question, “What about the kids?” This question was answered in 2010 by the Oscar nominated film, “The Kids are All Right (see trailer below), but what does the research show?

Children in same-sex parent families had higher scores on measures of general behavior, general health and family cohesion compared to population normative data. There were no significant differences between the two groups for all other scale scores.

Echoing Justice Kennedy’s concerns, this study also found that the greater the stigma a same-sex family faces, the greater the impact on a child’s social and emotional well-being. However, a 2013 Technical Report from the American Academy of Pediatrics, “Promoting the Well-Being of Children Whose Parents Are Gay or Lesbian,” shows resilience among children raised by gay and lesbian parents. It concludes:

Extensive data available from more than 30 years of research reveal that children raised by gay and lesbian parents have demonstrated resilience with regard to social, psychological, and sexual health despite economic and legal disparities and social stigma. Many studies have demonstrated that children’s well-being is affected much more by their relationships with their parents, their parents’ sense of competence and security, and the presence of social and economic support for the family than by the gender or the sexual orientation of their parents

THE KIDS ARE ALL RIGHT

While myths exist that call into question the parenting ability of gay and lesbian parents as well as the impact of such parenting on children in their care, there is an ever increasing body of literature that clearly illustrates that the gay and lesbian adoptive parents in this sample fell into the desirable range of the parenting scale and their children have strength levels equal to or exceeding the scale norms.

According to their mothers’ reports, the 17-year-old daughters and sons of lesbian mothers were rated significantly higher in social, school/academic, and total competence and significantly lower in social problems, rule-breaking, aggressive, and externalizing problem behavior than their age-matched counterparts. Within the lesbian family sample, no Child Behavior Checklist differences were found among adolescent offspring who were conceived by known, as-yet-unknown, and permanently unknown donors or between offspring whose mothers were still together and offspring whose mothers had separated.

“Quality of Life of Adolescents Raised from Birth by Lesbian Mothers: The US National Longitudinal Family Study” (2012)

Adolescent offspring in planned lesbian families do not show differences in quality of life (QoL) when compared with a matched group of adolescents reared in heterosexual families. By investigating QoL, this study provides insight into positive aspects of mental health of adolescents with lesbian mothers.

We conclude that there is a clear consensus in the social science literature indicating that American children living within same-sex parent households fare just as well as those children residing within different-sex parent households over a wide array of well-being measures: academic performance, cognitive development, social development, psychological health, early sexual activity, and substance abuse.

The study assessed the influence of protective factors on the psychological adjustment of children who had experienced homophobia… No significant differences were found in the psychological adjustment of children in the present study and their age-matched peers in a U.S.-population sample. Homophobia had a negative impact on the well-being of children who experienced it. Attending schools with LGBT curricula and their mothers’ participation in the lesbian community were found to protect children against the negative influences of homophobia.

“Stigmatization and Resilience in Adolescent Children of Lesbian Mothers” (2009)

This paper argues that the focus of research in lesbian families should expand from comparing children in lesbian households with their counterparts in heterosexual families to examining personal, family, and community resources that can reduce the negative impact of homophobia on young people.

The research is clear. Good parents can be heterosexual or homosexual.  Beyond the important qualities of love and trust, healthy families share certain other characteristics. Here are the traits of healthy families from Dolores Curran’s book, Traits of a Healthy Family.