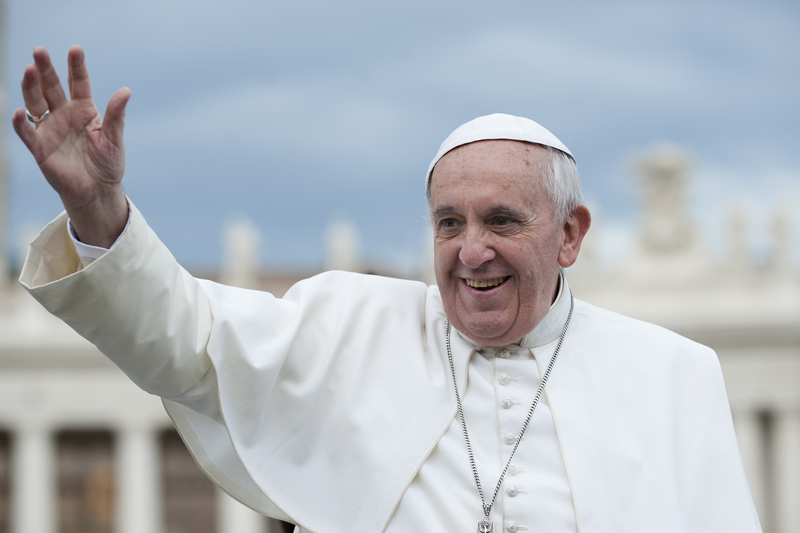 The climate change conversation is heating up in anticipation of the UN Summit on Climate Change taking place this December in Paris. Pope Francis hopes his encyclical “Laudato Si (Be Praised), On the Care of Our Common Home” will be part of the debate. In the encyclical he speaks of “the urgent challenge to protect our common home” and calls for sustainable development.

“We have forgotten that we ourselves are dust of the earth (cf. Gen 2:7); our very bodies are made up of her elements, we breathe her air and we receive life and refreshment from her waters”

WHAT IS AN ENCYCLICAL?

An encyclical, from the Greek word Egkyklos, is a circular letter written by a pope for teaching purposes and containing the pope’s views on church teachings and doctrine. The encyclical addresses a particular topic and is addressed to the Catholic community of 1.2 billion clergy and lay people. In the case of this encyclical, Pope Francis has said that it is addressed to all of the world’s people.

Here’s an overview of an encyclical from the Archdiocese of Toronto. 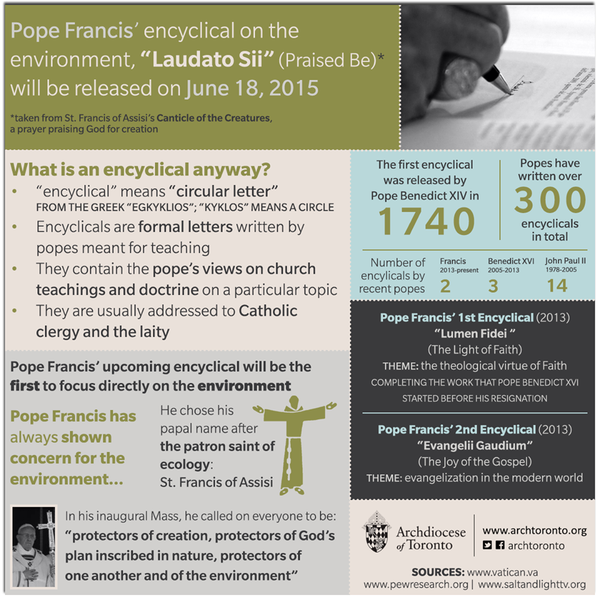 The Vatican has been working on this papal letter for more than a year. It will be published in six languages, and its publication has been carefully choreographed. The encyclical respects the unassailable scientific case for taking action, but is rooted in the faith of Pope Francis.

“The climate is a common good, belonging to all and meant for all….A very solid scientific consensus indicates that we are presently witnessing a disturbing warming of the climatic system. Humanity is called to recognize the need for changes of lifestyle, production and consumption, in order to combat this warming or at least the human causes which produce or aggravate it.”

Francis is a member of the Society of Jesus, a learned and scholarly order, and took as his namesake, St. Francis, the patron of ecology. In his encyclical he acknowledges that humans have caused climate change, but puts the blame for environmental ills on the social imbalance between societies that over consume and the poor who are deeply vulnerable to environmental stresses. His encyclical is a call to the world to help the poor and vulnerable among us and draws on the Common Good teachings of St. Thomas Aquinas.

“Many of the poor live in areas particularly affected by phenomena related to warming, and their means of subsistence are largely dependent on natural reserves and ecosystemic services such as agriculture, fishing and forestry. They have no other financial activities or resources which can enable them to adapt to climate change or to face natural disasters, and their access to social services and protection is very limited.”

In this regard, he talks about the importance of renewable resources.

“We have not yet managed to adopt a circular model of production capable of preserving resources for present and future generations, while limiting as much as possible the use of non-renewable resources, moderating their consumption, maximizing their efficient use, reusing and recycling them.”

In the encyclical, Pope Francis essentially endorses the reports of the Intergovernmental Panel of Climate Change and the Pontifical Academy of Science, which hosted a four-day meeting on sustainable development and climate change in 2014.

“,,,a number of scientific studies indicate that most global warming in recent decades is due to the great concentration of greenhouse gases (carbon dioxide, methane, nitrogen oxides and others) released mainly as a result of human activity.”

As many have hoped, the Pope mentions the need for the world to transition from a fossil based energy system to a renewable energy system:

“There is an urgent need to develop policies so that, in the next few years, the emission of carbon dioxide and other highly polluting gases can be drastically reduced, for example, substituting for fossil fuels and developing sources of renewable energy.”

The Pope’s message is right in step with the decline of the coal industry and the stunning rise of the renewable energy sector. In 2013, the world added more capacity for renewable power than coal, gas, and oil combined and this shift will continue to accelerate. According to a new report, renewable energy growth soared to record levels in 2014, with over one-fifth of global electricity now supplied from clean energy sources.

Cheap coal is a lie. While global funding of coal-fired power companies remained steady in 2014, there are signs of cracks in the dam. At least seven banks have backed out of lending to Australia’s controversial Galilee Basin coal mine. And, just last month, Bank of America, once labeled “Bank of Coal,” committed to reducing exposure to coal mining companies across the board. According to Andrew Plepler of Bank of America:

This policy change comes after four years of campaigning from Rainforest Action Network and other groups, and is the strongest policy of its kind to date.

If you’d like to know more about the Pope’s encyclical or take action on climate change in other ways, here are some related resources:

Laudato Si (Be Praised), On the Care of Our Common Home” in English

Climate Change and the Common Good

Poll of Catholics on Climate Change

Prayer for Our Land by Pope Francis

Climate Change and You