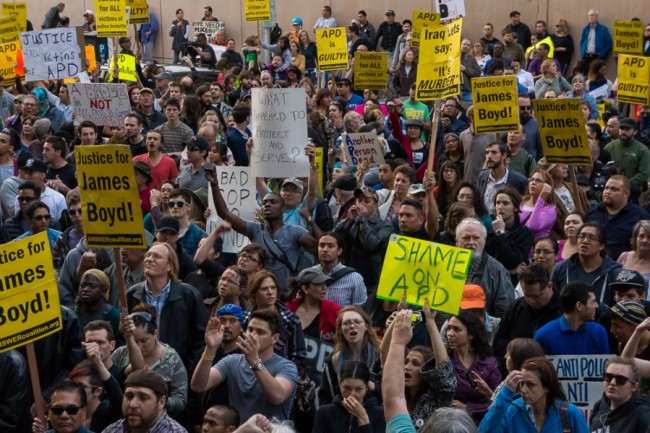 Sunday night the television program I was watching was interrupted by the breaking news report of a day-long demonstration in Albuquerque in which protestors stopped traffic on the highway and climbed on top of the police station. They were protesting two killings by the Albuquerque Police Department (APD) in one week.

A smaller demonstration earlier in the week protested the killing of James Boyd, a homeless man camping in the foothills of the Sandia Mountains (see graphic video below). Later on the afternoon of the Boyd demonstration, police in Albuquerque shot and killed another man, 30-year-old Alfred Redwine, who reportedly fired a round. This second killing precipitated the larger demonstration.

I’ve just learned that an unarmed man, Gilbert Angelo Serrano, was shot by a US Marshall on Tuesday in Albuquerque. This is the third shooting by Albuquerque law enforcement in one week.

According to Democracy Now, the APD has been involved in 37 shootings since 2010, 23 of them fatal. The department has been under inquiry by the US Justice Department for civil use of force since 2012 and Senator Tom Udall (DEM-NM) expects the department to conclude its investigation soon. The Federal Bureau of Investigation (FBI) and the New Mexico Attorney General’s office have both opened a criminal inquiry into the shooting of Boyd and Redwine by the APD. Police misconduct has cost the city more than $24 million in lawsuits since 2010.

Many of you may know “Burque” as the location for the hit TV series, Breaking Bad, but you may not know that it has a long history of activism. In 1966, during the birth of the modern Chicano movement, Reies López Tijerina led a three-day march from Albuquerque to the state capital of Santa Fe, where he gave the governor a petition calling for the investigation of Mexican land grants. He argued that the US annexing of Mexican land in the 1800s was illegal.

New Mexico is a poor state. We are tied with Kentucky for last in job growth and are one of just four states where non-farm payroll is contracting or showing zero growth. The state has not recovered from the recession. We are 48th in income growth; wages in 2013 were flat, rising just 1.7%. Our per capita income in NM is $36, 284; the national average is $44,543. We have the highest rate of child poverty in the country and the most hungry children. New Mexico is a poor state. Is our poverty a factor in the desperation of these APD shootings?

Or is it our sub par educational system? Just 63% of New Mexico students graduate from high school. Only the District of Columbia has a higher drop-out rate. And, less than a third of New Mexicans have graduated from college (28.9%) Only Alabama and Nevada have fewer college graduates. According to the New Mexico Coalition for Literacy, nearly  half (46%) of New Mexican adults are illiterate or functionally illiterate.

Democracy Now calls the APD “The Bounty Police Force” because according to Associated Press reporter, Russell Contreras, officers receive $1000 after a shooting for rest and recuperation. APD officers also receive a $5000 hiring bonus. One year after graduation from the Police Academy, a Police Officer First Class in the APD can expect to make $52,374.40, comparable to what a New York City policeman makes after two-and-a-half years. ($52,786). In addition, APD officers can earn up to 25% above their yearly base pay in overtime and benefits.

Some have called the APD training into question, training that requires officers to draw their guns whenever they are drawn upon, rather than to take cover, or use non-lethal force. Albuquerque mayor, Richard Berry, wants to raise the salaries of the APD and give them new cars. He has also budgeted $1 million to increase police training in dealing with mental illness and with deescalating tense situations. Critics say that this is not enough and a sweeping class action lawsuit was filed Wednesay in the name of the mentally ill.

According to a New Mexico Public Defender Department report, nearly 75 percent of those shot in 2010 and 2011 by the APD suffered from mental illness. The Police Executive Research Forum, a Washington-based nonprofit, released a report in 2012 calling for minimizing the use of force by the police in situations involving mental illness.

Emotions are strong in Albuquerque right now. All appreciate the challenging nature of a police officer’s job and know that the majority of officers are helpful and restrained. However, right now “Burquenos” are afraid of the police and distrust them.

I live less than an hour from Albuquerque and lived there for six years in the late 70s and early 80s; two of my chidlren were born there. Yesterday I drove to Albuquerque to go to the dentist and I noticed how carefully I adhered to the speed limit as I entered the city. I didn’t want to be stopped by the police. I was afraid too.