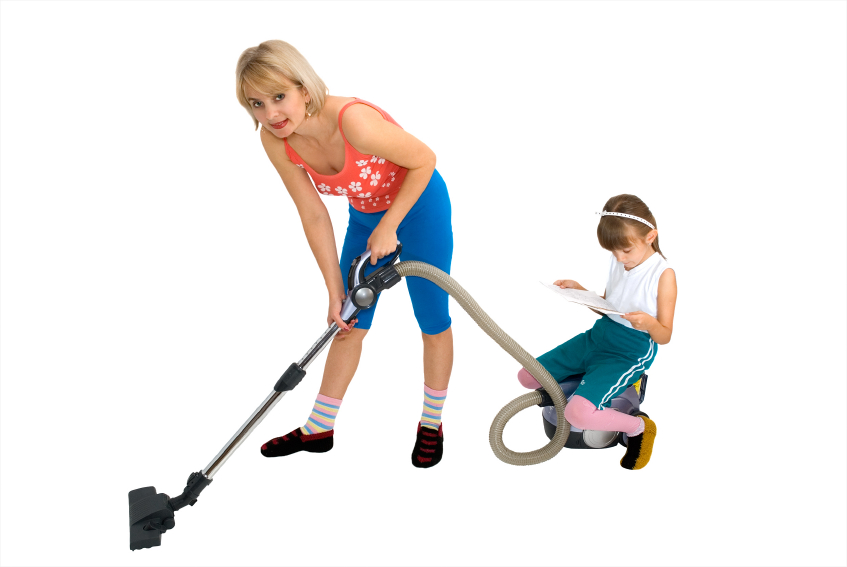 Some days suck. Like yesterday for instance. My toddler immersed our cordless phone in water, swallowed a marble and caught the cat’s tail in the fridge. My five-year-old rejected her pancakes as too crunchy, applied eye shadow to most of her body and cried inconsolably because all of the pink crayons were ‘naked’ without their wrappers. It was 9:45 in the morning.

I don’t have a nanny and I had already eaten half a bar of chocolate. Days like these used to send me into a tailspin of panic. Now I fight fire with fire. When the days suck, so do I—I have discovered the fine art of vacuuming.

WHY I LOVE VACUUMING

If you ask me, vacuuming has gotten a bad rap; it’s a misunderstood pillar of domesticity. The vacuum was invented in 1901 by H. Cecil Booth, a British engineer, who tested his idea of a dirt-sucking machine by laying a handkerchief on a chair, putting his mouth to it, and sucking hard. He nearly choked. But upon seeing the dust and dirt it collected he persevered. From a near medical catastrophe emerged greatness.

Things that suck are not generally held in high esteem, but they can be powerful motivators. At the tender age of eleven when presented with a plate of pot roast and potatoes (a meal I despised) I steeled myself, looked my mother in the eye and told her, ‘This sucks!’ Instead of meat I was met with a mouthful of soap, believed to be just punishment for language so foul and disrespectful.

But I was a plucky child and I held fast to my love of the word; it conveys so much. Like the legendary black holes of space, some situations, some people, and indeed some foods come bundled with such repugnant intensity that they suck the good right out of us.

Vacuums, on the other hand, suck the bad—the dirt, the grime, all the unwanted evidence. Unfortunately, my floor is littered with more than just that. Out of my head spill unfriendly thoughts, unwise advice and a fair measure of non-maternal instinct.

Before I learned to vacuum, things weren’t so good. I knew I was losing my grip when I stopped thinking Lynette had a problem. A stay-at-home mom, she seemed to be ‘Desperate Housewives’ best character. A television soul mate. When she matter-of-factly uttered, ‘I have four children under six. I absolutely have anger management issues,’ I felt the warm twinges of kinship. She was tired, cried for no reason and didn’t like to cook. What’s not to love?

But as time wore on my view changed. By the time she was scarfing down Ritalin I had stopped caring. I mean, hey, she had a great house, a cute husband, really nice clothes and way too much time to spend with her friends. Not to mention she looked too damn good. She was no longer one of us.

So I was forced to switch channels. I needed a fantasy more desperate, more inspirational. My muse was surprising. He was fifty feet tall, incredibly hairy and quite famous. While Lynette focused on scoring speed, I zeroed in on King Kong. It went something like this.

My toddler decorates my silk top with a purple marker. I see the big gorilla. My five-year-old makes shrieking demands for new ballet slippers at 7:15 AM. I smile at the big gorilla. My toddler then decorates his sister with the purple marker. I am the big gorilla. Large and looming, I hoist my tiny children into my paws. They squirm and kick, though. I am careful not to drop or crush them. One by one I place them on top of the Empire State Building. Taxis honk noisily 380 metres below. I stomp away, off to a gorilla café to have a latte in peace.

BRING ON THE DEMONS

Then one day I realized something. I’ve been trying to keep the demons at bay. But why? Why not let them out, say hello and then banish them. Why not admit that I struggle with the demands of motherhood? Why do we all feel guilty when we hear our own internal monologue? Why do we feel we have to just suck it up? I got tired of sucking it up. So I decided to really suck it up—trash the metaphor and move into reality.

My mother used to say, ‘When life gives you lemons make lemonade.’ I hate that expression. When life hands you lemons it’s usually when you’ve been out looking for strawberries. Or new shoes. It’s the same with motherhood. The lemons of motherhood are the ones that need sucking away. They need safe exit, an escape route that bypasses your children yet inhabits the truth. But to say goodbye to something you must acknowledge that it exists in the first place and now I do.

On the days that suck, I vacuum. Like the meditating monk, I let the whir of the machine take charge. I emerge with a clean living room, an improved attitude and a reminder of what’s important in life. And I am treated to five minutes when I can’t hear a word my children say.

Lauren Porter is a clinical social worker and psychotherapist, as well as Co-Director of the New Zealand-based Centre for Attachment. Her current professional focus is the merging of attachment theory with neuroscientific data, with an eye towards the practical applications of everyday life. She is the mother of two.