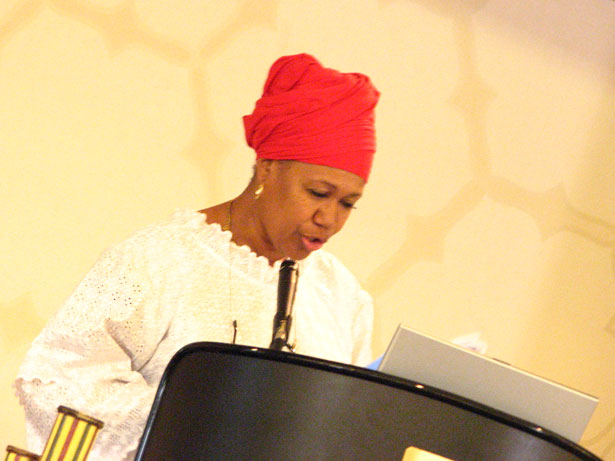 When I called Shafia Monroe, president of the International Center for Traditional Childbearing (ICTC), to talk about coming to the 7th International Black Midwives and Healers Conference in 2010, she commented on the lack of diversity among the leadership of birth and parenting organizations in the US, a lack that I too have observed. In response, Monroe put together a diverse panel of presidents of major US health organizations.

Monroe sees ICTC as a midwifery building organization. She said that there are not enough women of color who want midwives or who want to become midwives. ICTC has created a fast track to midwifery and has already graduated 300 midwives. The organization also offers doula training.

ICTC conducted a pilot study of 300 black women regarding how they were treated by their care providers during pregnancy. There is some evidence that birth outcomes are worse if a black woman is not cared for by a midwife of color. Ninety percent of the women in the study reported being alone during birth and none were offered a doula. ICTC intends to follow up their pilot study with a national survey. Monroe concludes that most pregnant black women do not feel supported within their community.

Loretta Ross is the president of SisterSong, an organization that has created a framework for reproductive justice, and that, along with the Black Women Health’s Imperative, is working to create a national coalition of organizations of women of color. According to Ross, reproductive justice is a human right: the right to birth and parent your child in the way that you want and the right to decide whether or not to have children. SisterSong views midwifery also as a human right and gives $100,000 a year in scholarships to SisterSong member midwives.

The National Black Women’s Health Imperative, originally the National Black Women’s Health Project, is a 140,000 member organization founded by Ms. Byllyee Avery at the first black women’s health conference at Spelman College in 1983. The mission of President and CEO, Eleanor Hinton Hoytt, is to raise the voices of black women as they relate to health and to “get rid of restrictions that limit who we are and what we can do.” She wants to see power back in the hands of women.

The Black Women’s Health Imperative is working for an increased minimum wage and for paid sick leave. Without paid sick leave, women cannot leave work to take care of sick children or go to prenatal visits. The median income for black women is $26,796.

Kathryn Hall-Trujillo is the president of Birthing Project USA, an organization that also works for reproductive justice for women of color. She wants to help women have permission to sister one another and believes that the pain of being separated from one another is an underlying cause of infant mortality. Birthing Project USA supports women in Haiti, New Orleans and all over the world.

Kathi Barber is the founder and president of the African American Breastfeeding Alliance (AABA). Her organization works to un-teach about infant formula because she says that black women tend to believe that formula is the same or better than breastmilk. She also educates about the commercial interests of the $3 billion a year formula industry.

AABA promotes breastfeeding as a woman’s right and stresses the particular advantages of breastfeeding for black mothers. Breastfeeding can reduce infant mortality by 20%, and is particularly needed in Newborn Intensive Care Units (NICU). Breastfeeding helps contract a mother’s uterus after birth, thus reducing bleeding, which is especially helpful in situations where she is not well cared for and finally, breastfeeding reduces postpartum depression.

Pat Barella has created The International Doula Registry of Professional Services (TINDROPS) to maintain standards of practice, lobby for the professional doula and educate the public. Barela was the first to seek approval from the National Uniform Claim Committee for a code for doulas. DONA wants doulas to be available to all women and hopes to encourage and train doulas to be successful at both the service and the business of being a doula.