We’ve all been there. You know, the moment you realize that delivering the baby was NOT the hard part. I remember thinking after my little one was born, “I’ve got this” as if sheer confidence would keep me from derailing— but no. Babies come with their own story, their own journey and they invite you along for the ride.

You’ve probably made the trip to plenty of amusement parks in your lifetime. Those who love to be scared look far and wide for ways to satisfy that craving. This is one of the main reasons why amusement parks are so popular. However, not all roller coasters are created equal.

I consider myself an adventure junkie so what I expected was a thrilling “loop de loop” experience. Instead I boarded the most intense ride of my life. Yes, scary, bumpy, dark tunnels, twists and turns, hot and sweaty. Most of the time I had no idea where I was going but I couldn’t jump off so I held on for dear life! The “Giga Coaster” is how I describe the first few weeks of motherhood.

Sounds terrible right?! Maybe you can even relate, if so, you have my sympathies. The good news is that I was rescued off the ride by a simple gesture, a referral from a friend to the Balanced Baby Clinic in Chatham, New Jersey.

I show up at Balanced Baby Clinic all bleary-eyed and desperate for answers.  Already having two other children, I felt silly and embarrassed that I could not help my son feed and feel better.

I was warmly greeted by two women, Alyssa Frey who is an occupational therapist and craniosacral therapist, and Maria Parlapiano a nurse, lactation consultant and craniosacral fascial therapist. I was ecstatic and relieved to learn that they had joined forces to form the Balanced Baby Clinic integrating both their specialties (lactation & CST) in the same room, at the same time. Can I hear you say “convenience?!”

For some of you this may be the first time you have heard of CranioSacral Therapy?  Or maybe, someone has suggested that your baby needs “bodywork” and you are thinking,  “Say what?!”  What is “bodywork” and why would a baby need that?  Sarcastically, I thought if anyone needs bodywork, it’s me! (no worries, we’ll get to me later.)

This is the scoop: CranioSacral Therapy (CST) was pioneered and developed by osteopathic physician John E. Upledger following extensive scientific studies from 1975 to 1983 at Michigan State University, where he served as a clinical researcher and Professor of Biomechanics. It is a safe and effective hands-on technique which involves applying gentle, sustaining touch to the tight connective tissue or fascia woven throughout the entire body. Trained practitioners look and feel for “stuck” embedded areas and free them up. This allows for unrestricted movement, symmetry, better overall function, growth and development.

Since this is so important, I am extending myself in gratitude, sharing my story to help other parents disembark their scary ride. So buckle up—here we go!

I had a very healthy and happy pregnancy. Frankie was born the day after his due date. Labor started at 4 AM in the morning and I had him at 9 PM that night. Active labor lasted about two hours.

The delivery was the tough part as Frankie was posterior (facing up), which caused me to have intense back labor. He was also eight pounds, two pounds more than my previous children. But props for me—I birthed him drug free!

After he was born, my husband noticed Frankie’s body was curved like the letter “C” with his head turning always to the left. Of course, I didn’t notice anything because I was on a cloud of bliss after delivering a beautiful, healthy baby boy!

Post “cloud” I started to notice certain things. Frankie constantly had the hiccups. He spit up a lot and never liked to be placed down on his back. His chin was sitting on his chest so he had never-exposed creases under his chin/chubby neck. I thought he just “preferred” turning his head to the left but it was stuck that way. His held his hands in tight fists all the time. And his arms and hips felt tight making it difficult to diaper and get on his clothing. And I thought he was just extra strong!

Oh, and did I mention he destroyed my nipples while nursing? The hospital nurses told me that he did not have a tongue/lip tie but I decided to have him evaluated by Maria, who specializes in this.

Maria did a thorough exam including a feeding evaluation. Sure enough, she showed me his tongue and lip ties and explained their impact. Also, she confirmed that his body was, in fact, curved to one side, which explained why he would scream while being held and nursed on the opposite side. So, Maria helped me with new positions to nurse Frankie which made him instantly content. She recommended bodywork to start and then referred me to one of the best doctors for verification and release of all his oral ties. To complete the care plan: bodywork after to release all the remaining strain and tension patterns.

I came to learn from Maria and Alyssa that those ties were not only tightening the mouth, face and jaw but holding other parts of his body as well. All his strain and tension patterns were causing him discomfort and limiting his movement.

With the proper prep and support of the Balanced Baby Clinic, we had his lip/tongue releases done at four weeks old. Frankie was nursing better in just a few hours. He also had little to no hiccups and the reflux issues began to diminish. Most importantly, he was so much more settled and happy. I could see that his entire nervous system was calmer. Frankie was beginning to let his sisters hold him and bond with him, which was a huge win for my family (no more roller coaster!)

I continued to take Frankie to the Balanced Baby Clinic weekly and the results that I witnessed were incredible. Each week, he continued to unwind like a ball of yarn before my very eyes. Tightly clenched fists began to open and soften; movement in his head and neck became fluid in both directions; he was sleeping for longer stretches and waking up happy; tummy time became more enjoyable. Frankie is hitting all his milestones early and he is able to handle new environments without instantly becoming over stimulated. The Balanced Baby Clinic transformed my tense, fussy newborn into a peaceful baby….speed demon rehab!

These are the three things I love most about the Balanced Baby Clinic. First, they do bodywork as multiple hands therapy (two practitioners work in synchrony and with efficiency). Second, my feeding difficulties and concerns were managed by an IBCLC. Third, I was also treated on the table, which I desperately needed. My back, my neck, my hips were in lockdown! Also my other children always felt included and got to experience bodywork too.

During a very overwhelming time in my life, the clinic quickly became my safe haven. Upon entering the clinic each week, I would instantly breath out a sigh of relief, like bricks were being lifted from my shoulders, almost as if this healing and nourishing energy encompassed me from the moment I walked through the door.  Questions, concerns, anxiety that would come up would often be put to rest as Maria always had a quick and simple explanation based on her many years of experience in the field. Alyssa was so in tune with Frankie’s system, she immediately knew where to place her magical hands in support of optimal growth and development.

Lastly, I looked forward to MY turn!  Exiting the roller coaster and climbing onto the therapy table instead. That’s right mommas! I was able to close my eyes, focus on my body, relax and let go. This is what makes the Balanced Baby Clinic so amazing—it’s restorative for everyone!

Since this is a new model of care, contact Maria or BBC to assist you in finding someone in your area. Call 973-701-0606 for a referral. 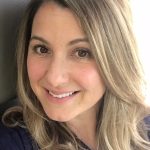 Marissa Marcantonio has a degree in English Literature and is certified as a K-8 and Special Education teacher. She taught 1st grade for seven years and after having her first daughter in 2010, decided to become a stay-at-home mom. Marissa currently lives in Madison, New Jersey with her husband and three children.