A year and a half ago, I started working on a feature documentary film, Women and Meds, about the options women face when they want to have children but take medication for mental illness. The process has not only been a personal journey for me, but one I hope will be helpful and insightful to others as well.

I remember having social anxiety as far back as third or fourth grade. I tell a story in the film about my pencil breaking during a test, and how rather than getting up and crossing the classroom to sharpen my pencil, I finished the test with the tiny stub of lead in my finger, because I was terrified to cross the classroom.

I started having panic attacks in college, and then my anxiety became full-blown in graduate school, where I was faced with an enormous amount of pressure to succeed as a filmmaker. From there, I went through a period of heavy psychotropic medication use, as well as recreational drug use (to medicate the anxiety) and recovery, and have been learning how to manage and deal with my anxiety on a much more positive and holistic level ever since.

A few years ago, my husband Gary and I began talking about having a child. We were approaching the “now or never” point (in terms of age), and realized that it couldn’t just be a “happy accident”, because the medication I was taking at the time could potentially cause harm to a baby. Being an OCD, control-freak planner, I began researching my options (which I saw as three things: wean off medication and risk not feeling well, stay on medication and risk harming the baby, or not have a biological child at all), planning consultation appointments with therapists, psychiatrists and high-risk OB-GYNs, and studying my calendar to make sure everything lined up with my work schedule, etc.

Along the way, I discovered that there was a lot of scattered and conflicting information, and no clearly defined path or source of information for myself or other women dealing with these issues. I felt that making a documentary film that not only followed me on my journey, but also highlighted the experiences of other women, would be the best way to consolidate what I was learning and communicate it to others.

WHY I MADE THIS FILM

I’m making the film to raise awareness and hopefully provide some guidance and useful information for other women and their families. I’m hoping that people walk away with a newfound sensitivity to what women might be going through, especially since mental illness and reproductive issues are two topics people are very hesitant to talk about publicly.

I would also like other women to know they are not alone – there are many of us going through this, and there is help out there. I can’t tell you how many people have contacted me with their personal stories, or stories of others close to them who are dealing with the same issue. Stigma and silence only hinder the process, and the more support from doctors, families and loved ones a woman has, the greater chance of a positive experience and outcome she’ll have.

The best personal decision for me was weaning off my medication, and I’ve been grateful and surprised that, at six-and-a-half months pregnant, I feel better than ever (even better than when I was taking medication, and I’m hoping that I won’t have to go back on anything afterwards). Of course, as an anxious person, there is always the thought in the back of my head that the other shoe will drop eventually, and that there will be a point where my anxiety becomes overwhelming again.

For instance, I worry about postpartum depression, and just this week started work again (teaching college) and had a panic attack on the first day of class. However, I try to remain positive and just take it a day at a time. Mental illness is a very self-centered disease; you’re constantly in your head, thinking or worrying about yourself and what’s happening to or around you, and I’m really looking forward to having a child to concentrate on, to take some of that self-centeredness away from me.

I also find myself being less of a perfectionist, and kinder with myself in terms of work and accomplishments. I’m obsessive, a workaholic and extremely ambitious, which has often been detrimental to my mental and physical state, and I feel like I’m doing a good job of allowing myself to take a break and focus on the basics, like eating and sleeping well, and being as healthy and calm as I possibly can for my baby.

Society leads women to believe that they need to sacrifice their career for family (or vice versa), but I’m feeling pretty confident that I can handle both. For me, the key to feeling well is all about balance, and I think that adding a family dynamic to my life will only help to balance things out even more.

We are currently raising money for the film, and have three weeks to reach our goal of $25,000 on Kickstarter, so please visit our page, spread the word, and donate if you can!

You can also find out more about the film on any of our social media sites: 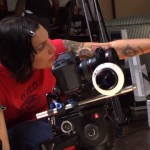 Dina Fiasconaro has an MFA in film production from Columbia University and a BS in TV, Radio & Film from Syracuse University’s S.I. Newhouse School of Public Communications. Previously, she was post-production coordinator at the Hallmark Channel, and has shot everything from super-8 music videos for indie rock bands to high-definition commercial projects for Panasonic. Her short films and screenplays have been the recipient of multiple grants and have screened at a variety of film festivals nationwide. Dina is currently an Assistant Professor in the Department of Film & Video at Stevenson University near Baltimore, MD.